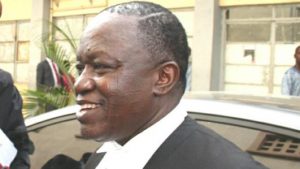 Senior Advocate of Nigeria (SAN), Adeniyi Akintola, has lamented that the Department of State Services (DSS) has succeeded in demoralizing judges and the legal profession in the country.

He said the administration of justice has been affected by the move against the judges by the DSS and that it is a challenge affecting the legal profession. He condemned the action and describe it as unconstitutional and illegal.

The SAN further said that resolution by the Senate to amend laws establishing the DSS with some security outfits in the country is an ignorant move because there was no law regarding the DSS to begin with.

He however commended the Senate’s move to invite the Attorney General of the Federation (AGF), Abubakar Malami (SAN) and the Director-General of the DSS, Lawal Musa Daura, to defend their actions in what the house described as a ‘draconian manner’ in which the DSS invaded the residences of the judges and arrested them.

Akintola stated that the DSS had long been overstepping its bounds and the Senate had done nothing about it. He recalled that during the administration of Olusegun Obasanjo, the DSS tore down the house of Mike Adenuga. He said a monster has been created in the DSS and Nigeria has found itself in a state of quagmire.

He explained that according to CAP 74 of the Laws of the Federation 1986, the State Security Service (SSS) was only provided for and the DSS is an illegal body.

“We are under democratic governance where the rule of law prevails. The question we should be asking ourselves is: do we have such thing as DSS in our statute books? The answer is no.

“The organisation known as the DSS is an illegal body that is not recognized by the constitution or act, CAP 74 of the Laws of the Federation 1986 that addressed the extablishment of national security agencies. There is nothing in the laws that refer to DSS. It is an illegal body”.

He further said that only the Armed Forces Act was amended by President Olusegun Obasanjo. He said no other amendment has been done for other auxiliary agency. In the case of the SSS and National Intelligence Agency (NIA), they are directly responsible to the president.

“Let’s assume the DSS can take the position of the SSS, the SSS replaced the NSO in 1986 and the transition supported by an Act. Section 2:3 stipulates the functions and duties of SSS on the internal security of Nigeria, in other words, the DSS is unknown to law,”he said.

The senior lawyer stipulated that the Act provided for the Defense Intelligence Agency, National Intelligence Agency and the State Security Service with their duties spelt out under Section two explaining the functions within Nigeria against any crime concerning national security and the protection and preservation of all known military classified matters concerning national security.

According to Akintola, the entire country, including the president, is bound by the rule of law and not martial law. Nigeria, he said is under a constitutional government and even the President is bound by oath to abide by the, “constitution of the Federal Republic of Nigeria and other extant laws”.

The approach adopted by government was faulted as contravening provisions of laws on the fundamental human rights of Nigerians where the security agency has been known to break down doors and into people’s homes. He said the constitution of institutions must be respected in the country to avoid a complete breakdown of law and order.

He further stipulated that the DSS overreached and usurped the powers of the National Judicial Council (NJC) constitutionally mandated to handle matters of disciplinary actions against judges.

“The organizations empowered to fight corruption in Nigeria was outlined as the Independent Corrupts Practices and other related offences Commission (ICPC), the Economic and Financial Crimes Commission (EFCC) and the Special Fraud Unit (SFU) of the Nigerian Police Force which are all under the control of the National Security Adviser (NSA),”he said, adding that the DSS has been over reaching.

Akintola said the former NSA, Col. Sambo Dasuki (rtd), who has been in the custody of the DSS since December 2015 did not use the details of the illegality of the DSS because he probably is not aware, explaining that the EFCC and ICPC has clear mandates to fight corruption.

He said there are a lot of ignorant persons being prosecuted and there are half-truths being spoken on-air by ignorant commentators. He gave an example of a lawyer who spoke about certain actions that can be taken under the Administration of Criminal Justice Act (ACJA), which has not been domesticated in many states in Nigeria.