Every man must get involved in at least one naughty thing in his lifetime.In case you have not been very adventurous,Courtroom mail recommends that you visit any of these events before you leave this world.If you are married,em em you can sneak in.Lol 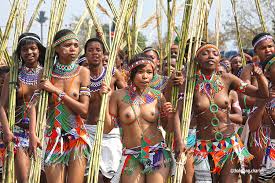 Umhlanga, or Reed Dance ceremony, is an annual Swazi and Zulu cultural event.In Swaziland, tens of thousands of unmarried and childless Swazi girls and women travel from the various chiefdoms to the Ludzidzini Royal Village to participate in the eight-day event.The young, unmarried girls were placed in female age-regiments; girls who had fallen pregnant outside wedlock had their families fined a cow.

Umhlanga was created in the 1940s in Swaziland under the rule of Sobhuza II, and is an adaptation of the much older Umcwasho ceremony.The reed dance continues to be practiced today in Swaziland. In South Africa, the reed dance was introduced in 1991 by Goodwill Zwelithini, the current King of the Zulus. The dance in South Africa takes place in Nongoma, a royal kraal of the Zulu king

2. The Fiesta of San Fermin-Spain 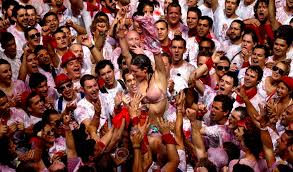 The fiestas of San Fermin are celebrated in Irunea/Pamplona, in the region of Navarra, every year from the 6th to the 14th of July. They have become internationally known because of the running of the bulls, where the bulls are lead through the streets of the old quarter as far as the bull ring by runners. Yes it is not just Bull running. There is the statue jumping. Females usually jump topless. A few days before the festival is the annual running of the nudes. 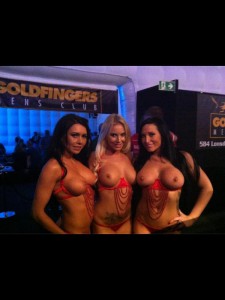 Sexpo specializes in erotica, with the organizers claiming that the true goal of this festival is to broaden your sexual horizons. Take them at their word or not, but the Sexuality & Lifestyle Expo has a reputation for being a jaw-dropper, to the point where this festival has become popular enough to spawn a sister event in Sydney, Australia. For those who prefer more mainstream entertainment, companies from a variety of G-rated industries now participate, with exhibits and events covering aviation, physical fitness, wine tasting and spa pools. 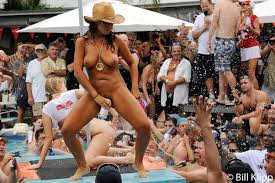 Fantasy Fest is an annual 10-day party in paradise for grown-ups. Started in 1979 by a small group of Key West locals, the party was created to bring visitors to the island in what was a typically quiet, but beautiful season. It worked. Fantasy Fest has grown every year since its inception and is now the wildest extravaganza around! Fun-loving revelers from around the globe bring their creativity and imaginations as they descend upon Key West each year in October for 10 days filled with costuming, parades, libations, and excitement!

Rio Carnival is a wild 5-day celebration, 40 days before Easter.

It officially starts on Friday and finishes on Fat Tuesday with the beginning of Lent on Ash Wednesday after which one is supposed to abstain from all bodily pleasures. Carnival with all its excesses, celebrated as a profane event, could be interpreted an act of farewell to the pleasures of the flesh. It is usually in February, the hottest month in the Southern Hemisphere, when summer in Rio is at its peak.

There are carnival celebrations on virtually every corner of Brazil, the best-known ones taking place in Recife together with the neighboring Olinda (in the Northeast of Brazil) and Salvador. But the biggest and most famous carnival is undoubtedly Carnival in Rio de Janeiro.