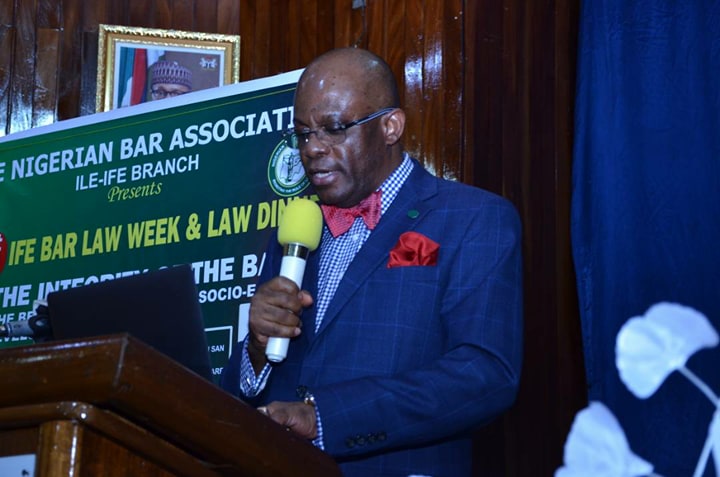 The Law week of the Nigerian Bar Association Ile-Ife began today at the Obafemi Awolowo University  Conference Center, Ile Ife,Osun State with His Imperial Majesty, Oba Adeyeye Babatunde Enitan Ogunwusi Ojaja 11,Ooni of Ife as the Royal Father of the day. In an information received by courtroom mail, the Special guests were the governors of Osun State,Ekiti state and Ondo State. Others are, Senator Iyiola Omisore, Senator Babajude Omoworara and Hon. Albert Adeogun

Paul Usoro, SAN speaking on the theme of the Law Week – Integrity of the Bar and Bench as a Panacea of Socio-economic Development in Nigeria at the Law week of the Nigeria has defined the operative words of Integrity and Panacea.

According to him, Integrity can be personal in the sense of uprightness/honesty. It may also be institutional as per the structural integrity of our institutions. Integrity of the Bar translates to that of the Bench as judicial officers have their roots in the Bar.

Panacea is simply put, the solution or cure to a problem.

He further stated that factors that Denigrate the Integrity of the Bar include human and institutional factors. The human factors include personal integrity and indiscipline of Bar men especially as it relates to the way they practice. Institutional factors include judiciary’s financial dependence on the executive, government’s undue interference and subversion of the rule of law, weak regulatory framework, poor educational system and poor remuneration of judicial officers.

Consequences Lack of Integrity of the Bar&Bench

All of these problems may not necessarily be the fault of those administering justice as they are institutional.

Dr Abiodun Saka Layonu was the Chairman of the