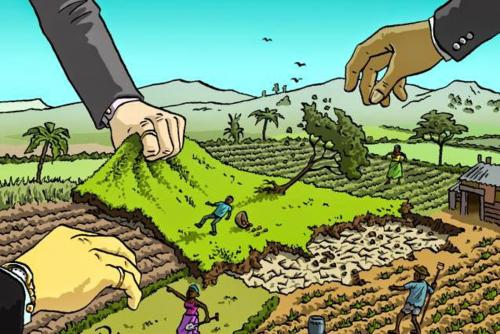 A DECLARATION that the unlawful invasion of the claimants’ properties with dangerous firearms, offensive weapons, malicious destruction/ demolition  of the claimants’ houses, churches, factories and industries without lawful and valid court orders/ judgment by the 1st to 4th defendants through the 5th to 8th defendants, with the purpose of chasing the claimants out of their respective parcels of land and annexed and fenced the annexed land, is unconstitutional, illegal and unlawful.

The Community Legal Representative, Tony Ezeani Esq. noted that the Lagos State Properties Protection Law 2016 prohibits any person from forcefully taking over of any land and entry of land by violence. The aforesaid Alhaji Mutairu Owoeye and his son, Garba Owoeye (also known as ‘ajagungbale’ ) has been charged before Igbosere Magistrate Court by the Police for the invasion an destruction of the Claimants’ properties.

Recall that in times past, many land grabbers have resulted to the use of ‘ajagungbale’ in Lagos to obtain or recover land. Many have lost their lives in the process while some have been maimed for life and several more have been traumatized after having their land seized and resold without a kobo for compensation, not to mention those locked in a cycle of unending court cases over trespass to their land. This practice of use of force or self-help or engaging in any act inconsistent with the proprietary right of the owner to take over any landed property has now become prohibited by virtue of section 2 of the Lagos State Properties Protection Law.

Similarly, a person who, without lawful authority, uses or threatens violence for the purpose of securing entry into any landed property for himself or for any other person commits an offence punishable on conviction to ten (10) years imprisonment[2] and such person’s right to possession or occupation of the property shall not constitute lawful authority for the use or threat of violence by him or anyone acting on his behalf for the purpose of securing entry into that property[3] and this shall be irrespective of whether or not the violence is directed against the person or against the property and the violence is intended to secure entry for the purpose of acquiring possession of the property or for any other purpose[4].

In the same vein, any person who makes forceful entry with firearms, effective weapons or any obnoxious or chemical materials or is in company of any person so armed or wounds or uses violence on any person commits an offence and is liable on conviction to four (4) years imprisonment[5].

The Law goes further to prohibit a person from placing or causing to be placed on any land or landed property, any land agent(s) for the purpose(s) of forcefully taking over the said land[6].