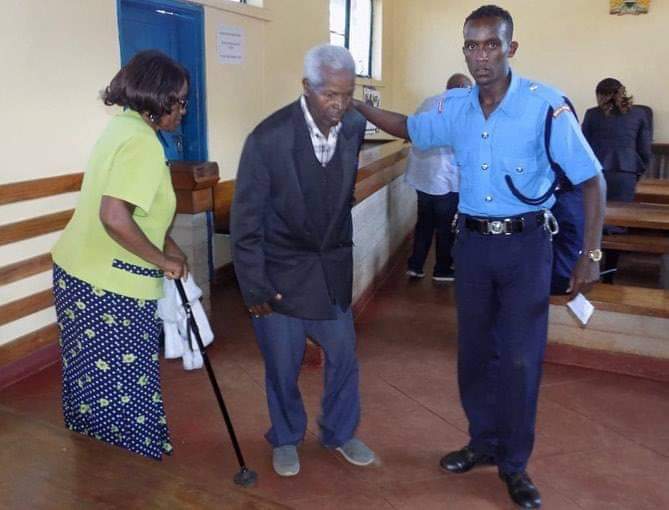 An Octogenarian has been jailed for 30 years with an option of paying a Ksh.1.2 million fine for grabbing land he claimed to have bought 51 years ago.

Evanson Kihumba was found guilty of six counts including willfully procuring for himself the Embu land.

The 83-year-old had claimed to have bought the land from Paul Kamara (deceased) at the Embu district’s land office on December 18 1968,

The land under registration No. Gaturi/Weru/377 actually belonged to Nyaga Kombuthi and was valued at Ksh. 12 million.

The accused was found guilty of irregularly obtaining the land, forging land transfer forms for Gaturi/Weru/377 and purporting it to have been transferred to him by Paul Kamara.

Other charges include swearing false oath on December 18, 2015 that his land Title Deed Gaturi/Weru/377 had been burnt and that he wanted a replacement.

He was also found guilty of conspiring to defraud Nyaga Kombuthu of the land between June 9, 2014 and November 18, 2014, by pretending that he had bought it from Paul Kamara.

He knowingly uttered a KCB discharge of charge for the Title Deed on October 10, 1981 and required the Registrar of Land to execute the discharge of land on June 9, 2014.

The complainant in the criminal case was one Silus Murithi Mbui, a son to the original owner of the land who died in 1970.

Principal Magistrate Samuel Mutai said witnesses who had been called by the prosecution proved beyond reasonable doubt that the man committed the offence.

The magistrate then fined him Ksh. 200,000 for each count and in default, he is to serve five years for each.

The octogenarian has 14 days to appeal the sentence with his lawyer Kirimi Guantai expressing his objection.

According to him, the sentence is too harsh and is illegal as it is not provided for in the Penal code.