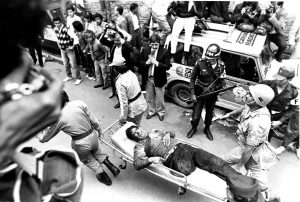 On the 6th of November 1985,the Supreme court of Colombia was preparing to deliver the opinion of the Court in regard to the constitutionality of the Extradition Treaty between Colombia and the United States.

At about  11:35am,the members of M-19 guerrilla group stormed the court and took everyone hostage include twenty five Justices of the court. On seizing the court, they demanded that President Belisario Betancur come to the Palace of Justice in order to stand trial and negotiate. The president refused.

The following day,the Colombian military led an operation to retake the building which led to about 100 casualities. The M-19 members did not go down without burning several important documents relating to high profile cases and personalities. The siege is one of the deadliest in Columbia in its fight with the rebel group.

One year after the siege, the treaty was declared unconstitutional.