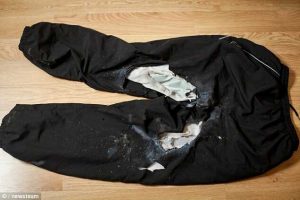 A Florida defence lawyer’s trousers have reportedly caught fire in court during an arson trial.

Stephen Gutierrez was to address jurors on Wednesday when smoke began billowing from his pocket, witnesses said.

The attorney fled the court and later returned unharmed with a singed pocket, blaming a faulty battery in his e-cigarette, the Miami Herald reports.

Mr Gutierrez, who had been arguing that his client’s car spontaneously caught fire, said it was not a stunt.

“It was surreal,” one witness told the Herald, while another pointed out that “a lot of people could have been hurt”.

Police and prosecutors are investigating the incident, the newspaper reports, saying that officers “seized several frayed e-cigarette batteries as evidence”.

Mr Gutierrez, 28, was making his closing argument to jurors when the fire erupted.

He returned to the court moments after running out, still wearing the singed pants, to explain the incident.

The defence attorney was representing Claudy Charles, who was accused of intentionally setting fire to his car in South Miami-Dade.

E-cigarettes have been known to catch fire, with several incidents caught on video.