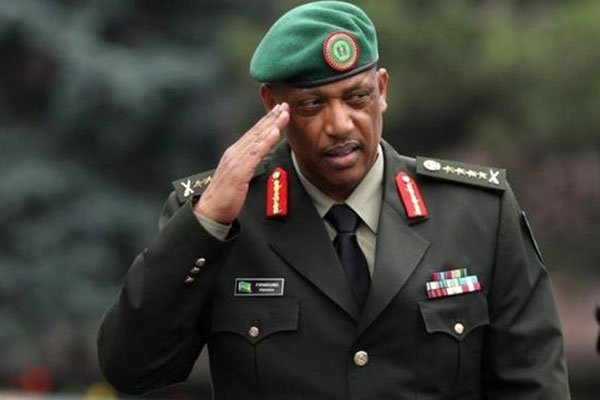 “Today, April 27, the president has removed Gen Nyamvumba from his duties as Minister forInternal Security, owing to matters of accountability under investigation,” Prime Minister Edourd Ngirente said in the brief statement signed on behalf of Kagame.
The 65-word statement did not go into the specifics of the stated accountability issues, but this publication understands Nyamvumba has been facing investigations over mismanagement of a tender for refurbishment of Rwanda Military Hospital, Kanombe.
The military hospital is one of the best run medical facilities in the East African nation.

In 2014, the Kigali government injected Rwf1.8b (about Shs72b) into efforts to turn the facility into a regional referral hospital.
At the time, Gen Nyamvumba was the Chief of Defence Staff of Rwanda Defence Forces (RDF), a position he held for six years after a tour of duty commanding Rwandan peacekeepers in South Sudan. He was moved from RDF command in November last year to head a revived internal security minister, a docket scrapped in October 2016 when Sheikh Musa FazilHarerimana retired. Kagame was forced to revive the ministry following a spate of rebel attacks on Rwanda, especially by FDLR militia in eastern DR Congo and a rag-tag outfit that allegedly operated from the southern boundary.
Gen Nyamvumba becomes the tenth high profile official Kagame has dismissed from his government in the last 18 months. Other powerful ministers such as Gen James Kabarebe (Defence) and James Musoni (Infrastructure) are some of the latest officials to be dropped.

However, unlike the others, Nyamvumba’s sacking was written in the skies like a protest banner being flown under a Cessna aircraft. Even before Monday’s tele-conference with journalists during which Kagame addressed himself at length on security issues of DR Congo-based Rwandan militia, FDLR, it was a matter of time as the appointing authority had himself warned it was coming two months ago. While explaining the sacking of three top officials during the Leader’s Retreat on February 16 at the Gabiro Military Training Centre, Kagame warned that some officials “could be next.”
And Kgame did not just leave it to a guesswork, naming those at whose chests the cross-hair of his sacking sniper were trained as Gen Nyamvumba and Defence minister Maj Gen Albert Musasira.

“They will have to explain a case regarding the state of national hospitals or they will also be on their way out,” Kagame warned, complaining that some of his ministers were fond of “lying, carelessness and indiscipline.
At the time, he had sacked Health minister Diane Gahumba for lying about coronavirus test kits, Education minister Isaac Munyakazi for accepting a bribe of Rwf500,000 (about Shs2m) to doctor school rankings, and Justice minister Evode Uwizeyimana for displaying “bad manners on several occasions.”
Nyamvumba managed to stay in office for 70 more days but appears to have run out of luck in one of the most dreaded ways for military officers as he is likely to face the military tribunal.