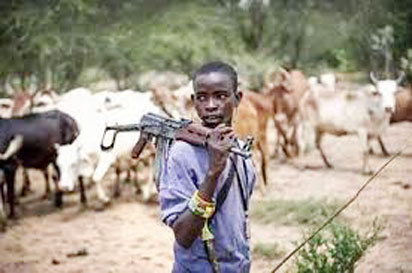 The Minister of Interior,  Lt.-Gen. Abdulrahman Dambazau (rtd.) on Tuesday in Abuja, held a crucial meeting with heads of internal security agencies over the herdsmen killings and other security challenges in the country.

Speaking shortly  before the meeting commenced, Dambazau expressed concern over the current security situation in the country.

The minister noted that the meeting was a follow-up to a parley with state governors two weeks ago over the violent conflicts  between farmers and herdsmen in Benue and other places.

“One of the issues that came up in the communiqué was the issue of the proliferation of small arms and drug trafficking and abuse. We also found out that these two issues are triggers to the violence taking place in this country,” the minister added.

He noted that without firearms and drugs, those perpetrating the violence would not have the courage to do so with such magnitude recorded in the crisis states.

The minister said there was need to take urgent steps toward ensuring that the situation was dealt with accordingly.

Citing the United Nations report on arms proliferation, Dambazau stated that there were approximately 500 million assorted firearms in West Africa, out of which 350mn were in Nigeria.

He said a large consignment of weapons had been smuggled from North Africa, particularly, Libya, as a consequence of the crisis in Arab country.

“The situation is worsened by the insurgency in the North East because of the supply of weapons to the insurgents and terrorists there.

“Likewise the supply of weapons to the militants in the Niger Delta through exchange of stolen crude oil and supply by politicians to deal with their opponents,” he said.

He added that the issues required action especially as the 2019 elections drew nearer, stressing that “if we don’t do something now, I am afraid things would be worse than this.”