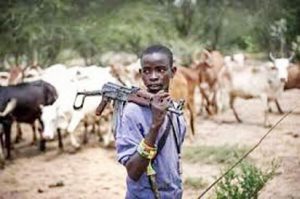 The police in Enugu State have arraigned a herdsman, Ibrahim Adamu, before an Enugu East Magistrates’ Court for allegedly being in possession of an AK-47 rifle.

The spokesperson of the police in the state, Mr Ebere Amaraizu, said that Adamu was arraigned on Sept. 16 and had been remanded in prison custody by Chief Magistrate Denis Ekoh.

Adamu was arrested on Aug. 29 at Affa in Udi Local Government Area.

He was arraigned on a three-count charge of illegally possessing and having under his control AK 47 rifle with 24 rounds of live ammunition in contravention of the Firearms Act.

The statement said that the offence was punishable under the Robbery and Firearms (Special Provisions) Act Cap. R11 vol. 14, laws of the Federation of Nigeria 2004.