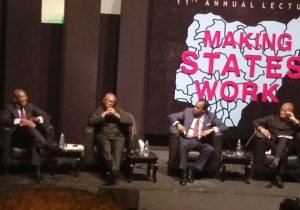 The 2016 AELEX annual lectures was held on yesterday at the Agip hall,Muson center,Lagos with a theme ” MAKING THE STATES WORK”

The 2016 edition was the 11th in the series with Former Governor of Cross River and Anambra Donald Duke and Peter Obi present. Professor Chidi Odinkalu,Mr Aig-Imoukhuede,Former MD of Access Bank and Mr Isaac Babatunde of Augusto & co were present at the lectures

Prof Odinkalu described as accidents a situation where some governors leave  Legacies after their tenure and subsequent governors refuse to build on or sustain those  legacies.

He described Peter Obi and Donald Duke as accidents that occurred in Government having left legacies that were not sustained.

He also spoke on the irrelevance of State creation which he said were inspired by military intentions.

The Lecture ended with a cocktail with the creme de la creme of the legal profession attending.