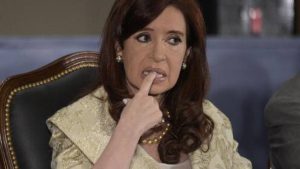 A judge in Argentina has ruled that the former president, Cristina Fernandez de Kirchner, should stand trial on charges of financial mismanagement.

Ms Fernandez, 64, is accused of fraudulently administering state funds in 2015.

The former economy minister, Axel Kiciloff, and the former head of the central bank have also been charged.

Ms Fernandez, who governed from 2007 to 2015, said the case was politically motivated.

Judge Claudio Bonadio said a total of 15 people would go in trial in connection with the case.

Ms Fernandez is accused of ordering the central bank to sell dollars on the futures market at artificially low prices ahead of a widely expected devaluation of the Argentine peso.

This, the allegation goes, caused Argentina to lose hundreds of millions of dollars.

The former leader is also being investigated over alleged corruption but the dollar futures case would be the first to reach the trial phase.

Ms Fernandez won the presidential election in 2007, succeeding her husband, Nestor Kirchner, in the top office.

Unable under Argentine law to stand for a third consecutive term, she backed Daniel Scioli in the 2015 election campaign.

But voters chose the conservative mayor of Buenos Aires, Mauricio Macri, instead.

Ms Fernandez says she has been the target of “political persecution” since Mr Macri came to power.