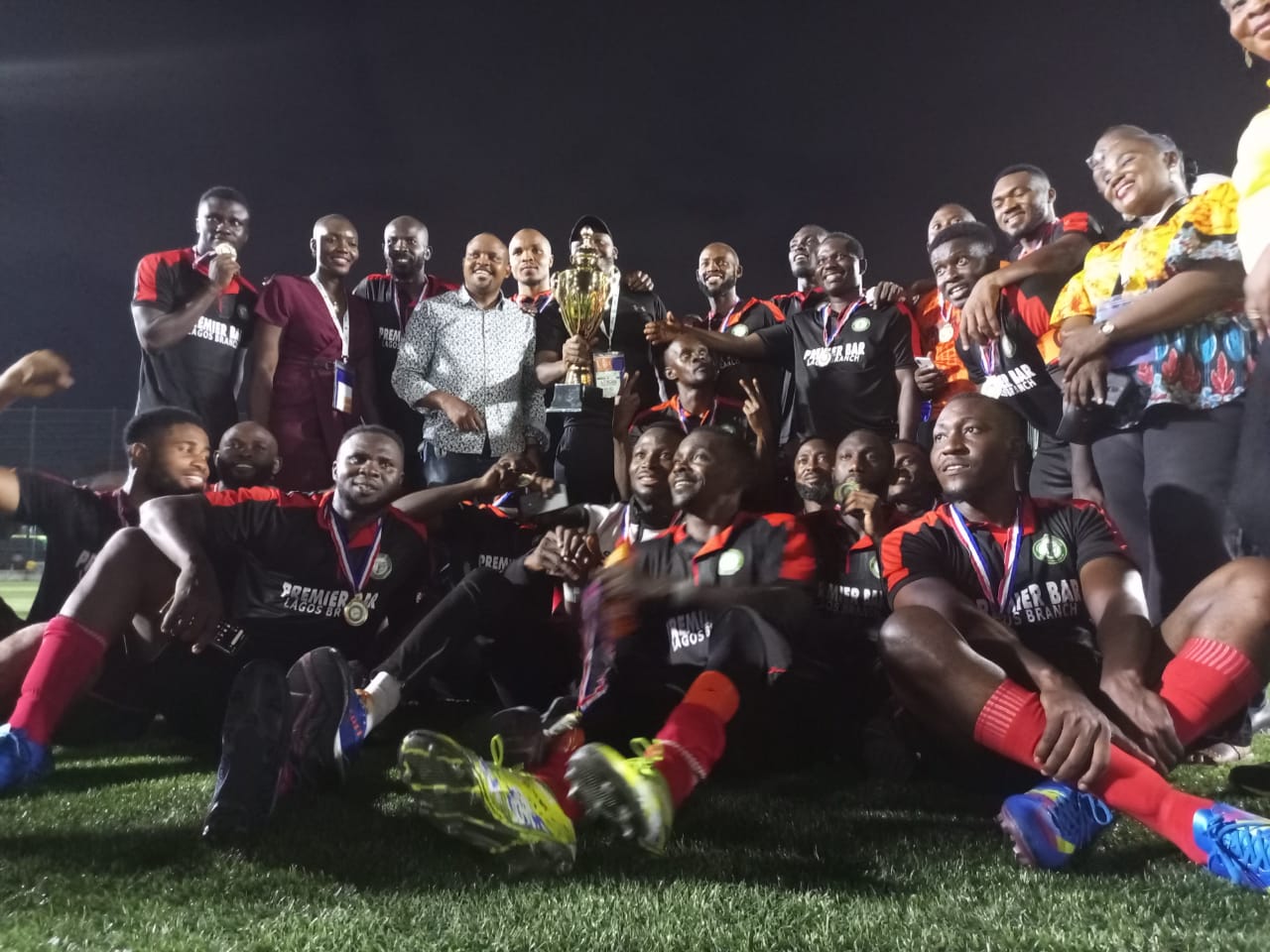 The football team of the NBA Lagos Branch, also known as the Premier Bar FC, won the NBA-AGC Football Competition for the first time in many years on Tuesday, 26th October 2021, at the Real Madrid Football Academy pitch, Port-Harcourt, Nigeria. The Premier Bar FC won the competition undefeated and kept clean sheets, concededing their first and only goal in the Final match against the Host Branch, NBA Port-Harcourt Branch.

The NBA Lagos Branch was drawn in Group A of the competition alongside NBA Yenagoa Branch, NBA Owerri Branch and a combined team of NBA Isiokpo Branch and NBA Okehi Branch. The Premier Bar FC started the competition on a flying note by defeating NBA Isiokpo/Okehi, by 10 goals to nil. After a cagey contest with NBA Yenagoa Branch in the second group game, the Premier Bar FC pipped the Yenagoa team to a slim 1 goal to nil victory. The Premier Bar FC proceeded to win the final group game against the Owerri team by 2 goals to nil in a well measured and efficient performance. The results meant that the Premier Bar FC qualified for the Semi-Final by winning Group A with a 100% win record, scoring 13 goals and conceding none.

The Semi-Final pairing against the Onitsha Branch was a much anticipated game, dubbed the El-Classico of the NBA-AGC Football Competition. For three consecutive years prior to the 2021 competition, the Onitsha Branch defeated the Lagos Branch at the AGC Football competition. The Semi-Final fixture between the NBA Lagos vs NBA Onitsha in the 2021 AGC turned out to be a great game of football! Within a few minutes into the game the Premier Bar FC fluffed two goal scoring chances. The team seized control of the midfield and restricted the tiki-taka style of the Onitsha Branch to the flanks making it difficult for the Onitsha team to have goal scoring chances. Then the great moment came when Abiodun Adenekan of the Premier Bar FC dribbled the goal keeper of the Onitsha team and strolled with the ball into the net shortly before the first half was over! Thereafter, the Premier Bar FC shut down everywhere and didn’t allow the Onitsha team to score in a defensive football masterclass. It was beautiful!

The Premier Bar FC marched gallantly into the Final match against the Host Branch, NBA Port-Harcourt Branch, albeit with a few injured players including the first choice goalkeeper. The Port-Harcourt team started brightly, operating in a tormenting fashion from their left flank and deservedly took the lead early in the First Half. The Premier Bar FC responded by taking control of the game and equalized shortly before the Half-Time whistle, through the calm placement of Adegboyega Omofolarin, the highest goal scorer for the Premier Bar FC in the tournament. The second half of the Final match produced no goals, taking the game into Penalty Kicks to decide the winner. After a pressure-soaked penalty kick session, the NBA Lagos Branch team emerged victorious, with a 4 : 3 margin with a kick left, after the Port-Harcourt team lost 2 out of their 5 penalty kicks, while the Premier Bar FC converted their first 4 kicks effortlessly.

The triumph of the Premier Bar FC is even more appreciated considering that the team was put together in less than two months. The hardwork of the players, well-drilled training routine implemented by the coaching crew, the team manager Yemi Akangbe,the branch Sports Committee Chairman Anthony Atata and the support provided by the Executive Committee of the Branch, led by Ikechukwu Uwanna.