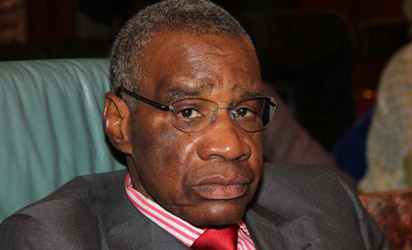 The Chief Justice of Nigeria, CJN, Justice Walter Onnoghen, on Thursday, received the remains of ex-CJN, Justice Dahiru Musdapher, at the international wing of the Nnamdi Azikiwe International Airport, Abuja.

Justice Musdapher died in a hospital in London in the early hours of Tuesday. The CJN, according to a statement by his media aide, Mr. Awassam Bassey, arrived the airport at 4.30am and met with the family of the deceased at 5.45am. Justice Onnoghen was said to have delivered a condolence message on behalf of himself, his family and the Nigerian Judiciary to the late jurist’s family and the people of Kano State.

“The Hon. CJN advised the family to be consoled that the late jurist had the honour and privilege of serving his country, Nigeria, at the highest level of the Judicial arm of government, and accept his demise as the will of God”, the statememt added. It will be recalled that the CJN earlier directed all flags within the Supreme Court and all Judicial institutions to fly at half mast till the end of fidda’u which is the seven-day prayer in honour of the deceased. In a related development, the CJN has cancelled planned inauguration of six committees in the National Judicial Council (NJC), billed for Thursday, to allow management and staff of the apex court to pay their last respect to the departed jurist.

Justice Onnoghen said the committees which would be saddled with the re-organization of the Judiciary, would be inaugurated at later date to be communicated after the burial rites of the late CJN. The late Justice Musdapher who died at the age of 75, served as the CJN from August 29, 2011, to July 16, 2012. He had prior to his elevation to the apex court bench, served as the Chief Judge of Kano State from 1979 to 1985, before he was promoted to the Court of Appeal where he served from 1985 till 2003.