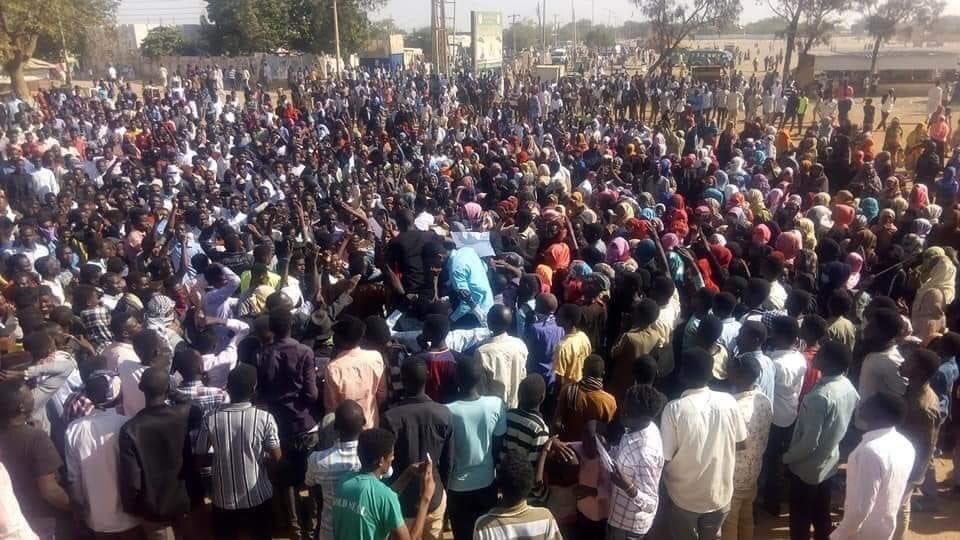 Sudanese security forces fired tear gas Thursday at thousands of protesters who rallied against a deal that saw the prime minister reinstated after his ouster in a military coup last month, witnesses said.

Demonstrators in the capital, Khartoum, chanted “the people want the downfall of the regime” while in the capital’s twin city Omdurman others shouted “power to the people, a civilian government is the people’s choice”.

Security forces fired tear gas to disperse protesters in Omdurman as well as in the central state of North Kordofan and in North Darfur, witnesses said.
General Abdel Fattah al-Burhan seized power and detained Prime Minister Abdalla Hamdok on October 25, but after international condemnation and mass protests he reinstated the premier in a deal they signed on Sunday.

Thursday marked a month since the military coup.

“I initially went out to protest to demand retribution for people killed after the coup, and now I am protesting against the Burhan-Hamdok deal,” protester Soheir Hamad told AFP in south Khartoum.

This deal “blocks the way toward a full civilian rule. We don’t want the military to play a role in politics”, she said.

Protests also broke out in other states including Wad Madani, Kassala, and the western Darfur region, according to witnesses.

Protest organisers have dubbed Thursday as “Martyr’s day”, to pay tribute to the 42 people killed, according to medics, in the deadly crackdown against anti-coup demonstrators.

By nightfall, demonstrations in Khartoum and other cities began to thin out, according to witnesses.

Pro-democracy activists in Sudan have accused Hamdok of “betrayal” and vowed to maintain pressure on the military-civilian authority.

Hamdok, who has been prime minister in the transitional government since the ouster of long-time autocratic ruler Omar al-Bashir in 2019, has defended the deal.

He said on Wednesday he had partnered with the military to “stop the bloodshed” and to “not squander the gains of the last two years”.

Protesters in North Khartoum slammed him, chanting “Hamdok is weak but the streets are powerful” and “Burhan is dirty” and has been “brought to power by Islamists”, connected to Bashir’s regime.

At one demonstration in Khartoum, protester Sediq al-Zubair said Hamdok’s partnership with the military is a “stab in the back of the revolution” that ousted Bashir.

Another protester, Amany Abdalla, said “we have no problem with Hamdok” but “we don’t want the military, we want a purely civilian” rule.

Ahead of Thursday’s protests, Hamdok met with senior police officials and urged them to secure the protests.

Volker Perthes, the UN special envoy to Sudan who helped mediate between the military and civilian factions after the coup, said Wednesday that the rallies were “another test of credibility” of the agreement.

He urged authorities to allow demonstrations to go ahead “without bloodshed or arbitrary arrests”.

Hamdok also said the agreement with Burhan has outlined a “clear date” for Sudan’s first free elections in three decades slated for July 2023.

Sunday’s deal raised hopes that Sudan will be able to return to its tenuous transition process but critics slammed the agreement as “whitewashing” the coup.

About 12 out 17 ministers from Sudan’s main civilian bloc calling for a full civilian rule, who were part of Hamdok’s cabinet before the coup, resigned Monday saying they rejected the deal which “legitimises the coup regime”.

Meanwhile, the agreement was welcomed by the United Nations, African Union, Western countries as well as Arab powerhouses Saudi Arabia and Egypt, which have strong ties with the Sudanese military.

Several civilian leaders who were arrested since the coup were released this week but key figures have remained in detention.

Perthes welcomed the releases but said “if the ‘political agreement’ is to be taken seriously, all detainees should be released immediately”.