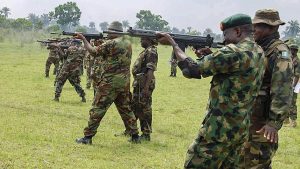 The Nigerian Army said on Wednesday that it had intercepted 37 people suspected to be wives and children of Boko Haram terrorists after they escaped from the insurgents’ custody. A statement issued by Brig.-Gen. Sani Usman, the Army Spokesman, said that 30 of the escapees were intercepted on Tuesday at Gujba Local Government Area of Yobe. Usman said that they comprised eight women and 22 children. “On preliminary interrogation, the suspects claimed to have escaped from Boko Haram terrorists’ custody at Kafa and Abagajiri villages in Damboa Local Government Area of Borno,’’ he said. The army spokesman said that the other seven persons that included women and children were intercepted on Tuesday at Kamuya in Yobe. “They claimed that they escaped from Boko Haram terrorists’ hideout at Goropcha village, Damboa Local Government Area of Borno. “Both sets of escapees are currently being screened and profiled,’’ he said.