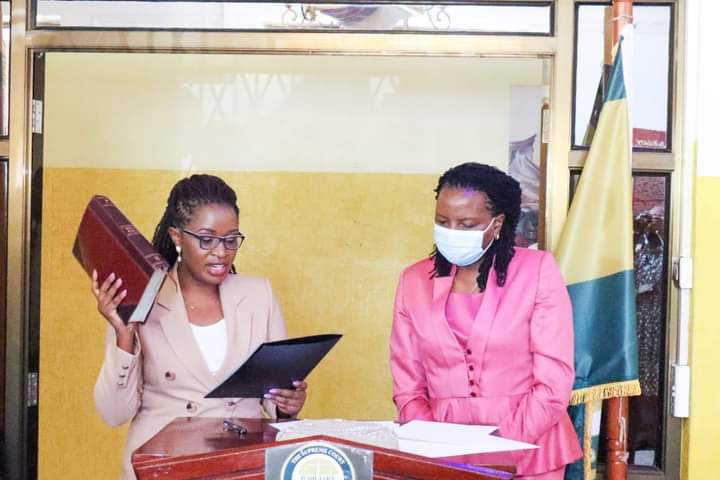 Mercy Wambua, has been sworn in as the new Secretary/ CEO of the Commission on administrative Justice( office of the ombudsman) . This follows the expiry of the term of the pioneer CEO Mr. Leonard Ngaluma who left the Commission after serving for ten years.

Mercy Wambua, was sworn into office in a ceremony presided over by Chief Justice, Martha Koome, on Thursday, March 3, 2022, at the Supreme Court Building, Nairobi. The oath was administered by the Chief Registrar of the Judiciary, Mrs. Anne Amadi.

Speaking during the event, Lady Justice Martha Koome reiterated the role of the Commission in addressing maladministration and applauded the incoming CEO on her appointment and congratulated her for her bravery in the legal sector. The Chief Justice commended Ms. Wambua for proving that rights can be fought for and noted that she is confident that the Commission is in safe hands with Ms. Wambua as the CEO.

The Chairperson of the Commission, Hon. Florence Kajuju, on her part congratulated Ms. Wambua and welcomed her to the Commission promising to support her in all her undertakings.

The Commission on Administrative Justice (office of the Ombudsman) is the foremost Constitutional Commission whose primary function is to ensure public officers and public institutions respect sovereignty of the people of Kenya.

Ms. Wambua is an advocate of the High Court of Kenya with 18 years’ experience having been admitted to the bar in 2004. She is the immediate past CEO of the Law Society of Kenya.