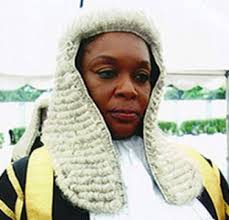 The Economic and Financial Crimes Commission, EFCC, has, Thursday, said that Justice Rita Ofili-Ajumogobia, one of the many judges invited by the commission has continued to disregard the invitation made to her to clear allegations of judicial misconduct levelled against her. The commission said, although some of the judges have been cooperative, Justice Ajumogobia has remained adamant in responding to her invite even as she has not given any reasons for her failure to respond. “Another set of two Federal High Court judges, Justice Agbadu James Fishim and Justice Uwani Abba Aji have, Thursday, responded to their invitation by the EFCC as they presented themselves before operatives at the Lagos zonal office, Awolowo Road Ikoyi. “Three other judges, Justices Mohammed Nasir Yunusa, Hyeladzira Ajiya Nganjiwa and Musa Haruna Kurya had earlier reported to the EFCC on Monday 17th October 2016 and yesterday 18th October 2016. Some of the judges who were accompanied by their lawyers have so far been cooperating with operatives as they make voluntary statements under very cordial atmosphere. “Meanwhile, Justice Rita Ofili-Ajumogobia, one of the invited judges was expected to show up at the Commission yesterday, is yet to honour the invitation as no reason had been given up till now for her absence.” Recall that Justice Rita Ofili-Ajumogobia was invited along side, Justice Musa Haruna Kurya to report to the EFCC Office in Lagos on Tuesday for interrogation but she spurned the agency’s invite and did not give any reasons for her action either. Justice Rita Ofili-Ajumogobia’s cover was blown open by detectives of the Economic and Financial Crimes Commission leading to the invitation of the medical director of Golden Cross Hospital after she had claimed that she was on admission in a Lagos hospital in Ikoyi hence she could not respond to the anti-graft agency’s invitation for interrogation on Tuesday. EFCC detectives, however, discovered that a staff of the hospital was trying to insert her name into their records as their patient.