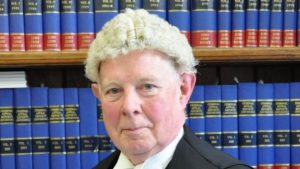 It lasted three days, brought together some of the country’s most eminent legal minds and, in the words of one, considered an issue of “fundamental constitutional importance” to the government, Parliament and the UK as a whole.

Bearing all of this in mind, it is perhaps no surprise that the 582-page transcript of the High Court hearing into Brexit, which concluded on Tuesday, make fascinating as well as, at times, gruelling reading.

At stake is the question of whether the government is within its rights to begin the process of leaving the EU – by triggering Article 50 of the Lisbon Treaty – without the consent and authorisation of Parliament.

During the application for judicial review of the government’s intended use of prerogative powers to kickstart Brexit, the 23 lawyers on either side of the argument covered a huge amount of ground.

Appropriately for a case hinging on the scope of parliamentary sovereignty, there was a dizzying amount of legislation referred to in court.

If that was not enough, a rich body of case law was thrown into the mix – covering disputes as diverse as the sequestration of a hotel during World War One, efforts to stop businessman Freddie Laker from securing a new airline licence in the early 1970s and changes to the criminal injuries compensation for firefighters in the 1980s.

Amid all the rifling through tabs and bundles of evidence, there were some lighter moments, including outbursts of sympathy for the short hand writer, assertions from both sides that academic research supported their arguments and a to-and-fro about whether the government’s planned Great Repeal Bill was misnamed.

There was also some rhetorical flourish to admire, from among others the constitutional historian and crossbench peer Lord Pannick.

The QC, who was representing Gina Miller – the investment manager challenging the government’s Brexit strategy – likened Parliament having to accept its authority being undermined “not to (it) straining at a gnat but swallowing a camel”.

Gina Miller, centre, arriving at the High Court on the second dayImage copyrightAP

Gina Miller, centre, arriving at the High Court on the second day

James Eadie QC, First Treasury Counsel representing the government, used terms such as “higher beasts” and “silver bullets” to describe the possibility of one piece of statute trumping another and likened the potential threat to certain rights from EU exit as “necessary incidents of leaving a club”.

But unlike certain TV courtroom dramas, there was little or no playing to the gallery or moments when the presiding judges, Lord Chief Justice Lord Thomas, Master of the Rolls Sir Thomas Etherton or Lord Justice Sales, had to admonish or direct any of the silks in front of them except to clarify points of legal argument.

It was quickly established on both sides that the issue was justiciable – in other words falling within the auspices of the courts to decide upon.

Except for Attorney General Jeremy Wright’s opening remarks on behalf of the government – in which the Tory MP outlined the sequences of events leading to the Brexit vote starting with David Cameron’s 2013 Bloomberg speech promising a referendum – there was precious little mention of the political tumult of recent months.

The timetable Theresa May has set for triggering Article 50 – and the implications for that process should the judicial review be upheld and an appeal that followed failing – was scarcely touched upon.

Parliament was “very likely” to be asked to ratify the Brexit deal, the court was told

With arguments raging about if, and when, MPs might get a vote on Brexit, Mr Eadie’s admission that it was “very likely” that Parliament would be asked to approve the final Brexit settlement – on the basis that it would take the form of a treaty between the UK and the rest of the EU requiring domestic ratification – stole most of the headlines.

However, he was quick to stress that what he described as “considerable further parliamentary involvement” was not a cast-iron guarantee of a binding vote and that either the UK or the EU could decide that it was not necessary.

As to the core legal arguments themselves, much time was taken up in discussion of the doctrine of necessary implication and whether it applied to the case.

Lord Pannick and his team focused squarely on the “extraordinary” prospect of rights conferred on UK citizens through the 1972 European Communities Act – which paved the way for the UK to join the then European Economic Community – and subsequent acts being removed without Parliament being consulted.

Warning of the risk of MPs and peers being effectively “pre-empted”, he contended there was a “direct causal link” between the irrevocable triggering of Article 50 and the ultimate “stripping away” of statutory rights, such as that of UK citizens to stand and vote in European elections, to petition the European Court of Justice and to seek the European Commission’s intervention to uphold competition law.

“The inevitable consequence of (Article 50) notification is to destroy those rights and to destroy them whatever Parliament may think about the matter,” he argued.

Other “valuable” rights “consequent upon EU citizenship” – such as freedom of movement across Europe – recognised by Parliament were also in question, he insisted.

“The preservation of other rights is taken out of the hands of Parliament. By the time Parliament comes to look at this matter, post notification, the die is cast.”

Arguing the onus was on the government to accept the “inherent limitations” of its prerogative powers unless Parliament “clearly authorised” otherwise, he said not to do so would be “inconsistent with the fundamental principle of Parliamentary sovereignty” dating back to the Bill of Rights, whatever the UK constitution’s legendary “flexibility”.

“Flexibility is, of course, an attractive concept but there are limits…

“However much flexibility there may be, a minister…cannot validly act to remove statutory rights, rights of a constitutional nature, without we say, breaking the back of the constitution and crippling it.”

But Mr Wright, the government’s most senior legal officer, said it was clear Parliament had had “multiple opportunities” in recent years to circumscribe the government’s prerogative powers with regard to EU exit, most recently in last year’s act authorising the referendum, and had chosen not to do so.

The power to activate Article 50, he told the court, was a “classic example of the proper and well established use of royal prerogative” with regard to treaty making and breaking.

The use of executive powers to give effect to the will of the British people in respect of the referendum result, he added, was “wholly within the expectation of Parliament”.

And he suggested that those now urging Parliament to be given a veto on the removal of specific rights and their subsequent retention risked transgressing on the referendum verdict itself by asking Parliament “the same question as put to the people”.

“It is important that there is clarity about the nature of the challenge and its implications,” he said.

“This is not, we submit, a narrow legal challenge directed to the technical procedural matter of notification.

“In reality, it seeks to invalidate the decision already taken to withdraw from the EU and to require that decision to be taken by Parliament.”

Drawing proceedings to a close, Lord Thomas thanked all concerned for their hard work and scotched speculation of a snap ruling, saying he and his fellow judges “shall take time to consider the matter and give our judgements as quickly as possible”.