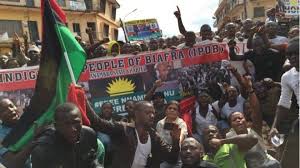 A team of five Northern governors led by the Borno state Governor, Kashim Shettimma has been sent to the South-East by President Muhammadu Buhari to broker peace in the region following the recent clash between the secessionist group, the Indigenous People of Biafra, IPOB, and the Nigerian army in Abia state. Others in the team are Aminu Masari (Katsina), Aminu Tambuwal (Sokoto), Atiku Bagudu (Kebbi) and Abdullahi Ganduje (Kano), as seen on TheCable.

The clash which saw gory images and video clips of IPOB members allegedly killed in Abia as well as some soldiers sustaining injuries led to the proscription of IPOB by the South-east governors and the categorization of the group as a terrorist organization by the Nigerian army. However, the Senate President of Nigeria, Dr. Abubakar Bukola Saraki has said that the proscription of IPOB and its categorization as a terrorist organization by the Nigerian army is illegal. Saraki gave the statement on Monday where he said due process was not followed in terming the group a terrorist organization as well as in proscribing it.