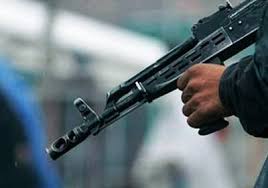 Yesterday was a day of tragedy in Ozubulu, Anambra state,South East Nigeria.Gunmen entered a church and shot worshippers.Many were killed.Information was released by the police that the shooting was by members of a drug cartel who came to the church to look for someone who duped them.

Almost all the young men from Anambra State who reside in South Africa are engaged in drug trafficking and internet fraud. I have met a handful of them who try to shame me for not jointing the fast lane business which is very lucrative. They don’t believe in legitimate means of livelihood. The only language these young men understand is money in abundance. Money is a defense but the love of money is the root of all evil according to the Holy Bible. You will find Anambra boys in South Africa, Malaysia, China, Germany, America and other parts of the developed world committing crimes for financial empowerment. Evans the kidnapper and the recent shooting at Saint Philips Catholic Church Ozubulu is an eye opener. Who do we blame for this moral decadence? Don’t get me wrong, I like money too.

I am speaking my mind because I am a full blooded Anambra State indigene. I hail from Umunsofor Ihiala in Ihiala local government area of Anambra State. The late Ezego is my kinsman. My PhD research topic is on the psychosocial and cultural correlates of dropout syndrome among youth in Anambra and Imo states of Nigeria. Against this background you will understand where I am coming from. By the way, I have written to the senators and government of Anambra state, none agreed to sponsor my doctorate program. I am shouldering the enormous financial responsibility alone. There is no encouragement for few of us who want to contribute to the development of the state and earn a living legitimately. There is hardly scholarship schemes or educational endowment fund for youth in my state. The government is more in interested in politics than youth development initiatives.

Anambra indigenes worship money and chieftaincy titles.  If you don’t smell rich, you are regarded as a never do well. The role models for Anambra youth are the illegitimate young men that flaunt their wealth via big mansions, exotic cars, designer apparels and beautiful women. Most of the modern architectural edifices you find in Anambra state today are built by international drug pushers and 419ers. These people are loved and hailed openly by their people and traditional rulers because of the money they throw around. Chieftaincy titles are conferred on criminals by greedy traditional rulers who don’t care about what they do for a living. We lost our moral values long time ago in Anambra state. The mantra is just make the money and spray it at public events. Both the young and old will sing your praises.

Anambra state is home to the highest number of entrepreneurs. A state that produced the likes of Chinua Achebe, Odimegwu Ojukwu, Emeka Anyaoku, Alex Ekwueme, Chimamanda Adichie, Ekene Dili Chukwu, Peter Obi etc have lost her moral fabric because of the encouragement given to hoodlums and miscreants who can kill for money. Elements that were hitherto ostracized from the society are now deified and projected as hard working role models and bread winners to my generation. The time is ripe for all well meaning Anambra indigenes to rise up and change this mindset of wealth by any means. A good name is better than gold and silver. May the souls of all Anambrarians who lost their lives in a church allegedly built by a South African based drug lord Rest In Peace!

Uzor Ngoladi is a writer, actor and researcher.