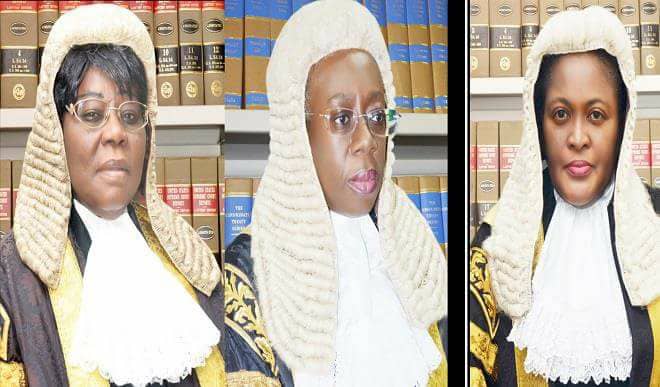 That women have come of age in legal profession in Nigeria is undebatable. Gone are those days when  it was the men only that decided what happened in the profession whether it is  in the court room practice,on bench or in the academia.Women lawyers in Nigerian have produced the first Professor of law in person Mrs Jadesola Akande of blessed memory who was also the first female Dean of the Faculty of Law at Lagos State University. The first female Senior Advocate of Nigeria is Mrs Folake Solanke and has been followed by chain of more female SANs. Nigerian women lawyers must remain eternally grateful to Mr. Kehinde Sofola SAN of blessed memory as it was he that led the campaign for the appointment and elevation of female judges to the Supreme Court.
In the book  LEGAL LUMINARIES , Mr. Sofola said ” In Nigeria, so far ,the Supreme court remains an all-male group. In the High courts, we have female judges. In the Court of Appeal, we also have female justices.The female judges and justices have been performing well.In civilized countries of the world,female Supreme Court judges have been appointed.In this country ,we have good ,fit and proper female candidates for the Supreme Court some of whom have been superseded by their juniors in appointment to the  Supreme Court” He made this assertion in 2005 and it wasn’t long thereafter that Hon Justice Mariam Aloma Muktar was elevated to the Supreme Court and eventually retired as the first female CJN. So far out of about 110 justices that have sat on the Supreme court bench only 6 are women,while two of them (Justices Muktar and Adekeye) have retired only four  i.e. Justices Odili, Ogunbiyi, Kekere-Ekun and Augie are still on the Apex bench.
Hon. Justice Zainab Bulkachuwa, the 6th and incumbent President of the Court of Appeal is the first woman to occupy the position. In the Lagos State High Court which has been described by some as the busiest court in Africa, 85% of its Judges are women.The Centre of Excellence has perhaps produced the highest number of female Chief Judges apart from the fact that it has recently produced successive Chief Judges who are biological sisters. All these are  strong proofs that women in Nigeria particular in the Legal Profession have come of age. Many women jurists particularly at the appellate courts have delivered fine judgments and made beautiful remarkable pronouncements.They have indeed proved one of their right and that was Hon. Justice Olufunlola Oyelola Adekeye (rtd) who once said that ‘Judgment writing is not for lazy judges’ . Our female lawyers particularly the upcoming ones stand to learn  a lot from all from all these great women who  have made positive impact on the legal  profession. But for them to achieve such goal they must be focus and hardworking as Rome was not built in a day.
What has the youngest female Justice on the Supreme Court bench has to say?
REMARKABLE PRONOUNCEMENT
On Ratio Decidendi and Obiter Dictum
“As stated earlier in this judgment, a ground of appeal must relate to the decision appealed against and should be a challenge to the validity of the ratio decidendi  of the decision reached.The ratio decidendi means ‘the reasoning for deciding’ or ‘ reasoning ‘, the principle or ground upon which a case is decided. The legal principle formulated by the court ,which is necessary in the determination of the issues raised in the case  ,in other words the binding part of the decision is its ratio decidendi  as against the remaining parts of the judgment, which merely constitute obiter dicta…An obiter dictum is a statement made in passing , which does not reflect the reasoning of court or ground upon which the case is decided.”
Per KEKERE-EKUN, JSC in Amobi Vs. Nzegwu (2014) 2 NWLR (Pt. 1392) Pg. 549 Paras A-D
Abdulrasheed Ibrahim served
as the Publicity Secretary of the Nigerian Bar Association,Lagos
Category: News by Editor