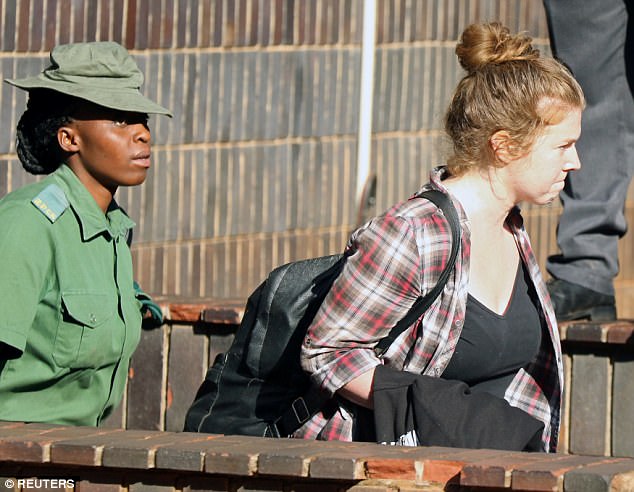 An American woman was unceremoniously thrown in jail in Zimbabwe on Saturday because police say she is behind a Twitter account which mocks the country’s president even though someone else has taken credit for it and continues to goad the leader from it.

Martha O’Donovan, 25, was arrested on Friday morning at her home in Harare, Zimbabwe, by police who accused her of being behind a tweet posted by anonymous Twitter user @matigary on October 11.

The tweet labeled Mugabe, 93, a ‘selfish and sick’ man and suggested he was relying on a catheter.

Police claim they traced its IP address to her home and they say she is behind the entire account despite the fact that it was still active on Saturday even after she was thrown in jail.

‘LOL they think she is me,’ said one of the tweets. They also joked that they had tried to turn themselves in but that the authorities want to keep O’Donovan behind bars because she is foreign.

Elsewhere they joked that they had tried to turn themselves in but that the authorities want to keep O’Donovan behind bars because she is foreign.

O’Donovan is a producer for the political satire TV network Magamba and who has studied human rights across Africa for years.

She is likely being held in one of two, notoriously grotty prisons – Chikurubi or Harare Central. Her representatives have not confirmed which but they plan to go to the high court on Monday to appeal her jailing.

Authorities in Zimbabwe said they traced the IP address of the October 11 post to O’Donovan’s home and they believe she is behind it.

She is now charged with undermining or insulting the president and may face an additional charge of attempting to overthrow the government.

A judge dismissed her lawyers’ motion to throw out the arrest warrant on Saturday and she was remanded in custody until November 15 when she will return to court for a bail hearing.

O’Donovan, a graduate of NYU, has been in Zimbabwe for the last year working for the local TV network Magamba and bar tending.

She went to Africa in 2013 to teach young local people how to become radio journalists as part of her NYU fellowship on human rights in Zambia, Zimbabwe and South Africa.

Magamba TV, which she now works as a producer for, describes itself the home of ‘satirical comedy sensations’.

As news of her arrest emerged on Friday, a #FreeMartha social media campaign calling for her release went viral.

The woman’s family in her hometown of Martinsville, New Jersey, have not yet commented on her arrest.

Her arrest warrant states that on October 11, she, under the Twitter handle @matigary, tweeted: ‘We are being led by a sick and selfish man’.

They also say she ‘founded’ Magamba – the network which she works for – and allege that she may be trying to ‘overthrow’ the government through her work for it.

Magamba was founded in 2007, when she was 15, by Comrade Fatso & Outspoken, two African men and hip hop artists.

Police say she also retweeted one of @matigary’s tweets on the Magamba Twitter account which referred to Mugabe as a ‘goblin’.

But on Saturday, as she sat in jail after handing over all of her electronics, @matigary was still active.

‘LOL I am in and still tweeting,’ they posted, pretending to be the woman.

In another tweet, they said: ‘I think I should sue Goblin for putting my name into disrepute.’

O’Donovan’s arrest is the first of its kind since Mugabe appointed a minister for cybersecurity last month.

It was a move which human rights activists criticized, claiming it infringed on free speech.

In a statement before her court appearance, she said: ‘I deny the allegations leveled against me as baseless and malicious.’

O’Donovan, a graduate of New York University, previously referred to herself as a ‘media activist.’

Earlier this year, she presented a talk at a republica digital culture conference on ‘How Zimbabweans Rebel Online’.

She was previously involved with campaigning for the release of Pastor Evan Mawarire who was jailed last year on similar charges.

She traveled to Africa in 2013 to work for The Children’s Radio Foundation where she said her job was to train local young people to become reporters.

It was part of her fellowship at NYU Gallatin which focused on human rights in African cities.

Upon her return in 2014, she said during one speech: ‘I think I came back with a lot more questions than answers.’

It is not clear when she returned to Africa but Magamba said she has been working for them in Zimbabwe for around a year.

O’Donovan’s case highlights the growing concern for human rights in Zimbabwe where hundreds have been prosecuted for appearing to undermine or insult Mugabe.

‘This arrest marks the start of a sinister new chapter in the Zimbabwean government’s clampdown on freedom of speech, and the new battleground is social media,’ said Amnesty International’s deputy regional director, Muleya Mwananyanda.

The TV network that she works for tweeted on Saturday: ‘It’s not all about Martha, it’s about every Zimbabwean. This is an attempt to silence our voice. Stifle freedom .

‘Free Martha or arrest us all.’