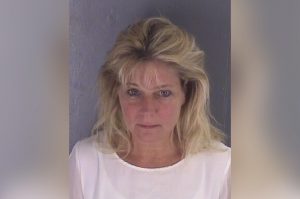 The wife of a Trump Organization ethics lawyer was busted for allegedly having sex in the back seat of a car with a jail inmate in Virginia, officials said.

In addition to working for Trump, Bobby Burchfield was a lawyer for George W. Bush during the 2000 Florida recall.

Teresa Jo Burchfield was allegedly doing the deed with a 23-year-old inmate who had trustee privileges, allowing him to go outside the jail.

“The defendant was caught in the backseat of her vehicle with an inmate,” according to a criminal complaint. “When the inmate exited the vehicle, he handed me a bag of brown pills (capsules), that he claims to be workout pills.”

Burchfield was charged with willfully delivering unauthorized articles to a confined prisoner. She was released on a $5,000 secured bond.