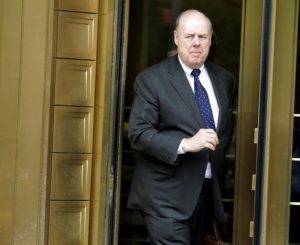 President Donald Trump has added a veteran Washington lawyer to the team representing him in the investigations of possible collusion by the Trump campaign with Russia, including the criminal probe being led by special counsel Robert Mueller.

John Dowd, who has represented key figures in a variety white-collar criminal matters and investigations, has joined the president’s defense team led by New York lawyer Marc Kasowitz, Mark Corallo, a spokesman for the team, said on Friday.

Another well-known white-collar Washington lawyer will likely join the team shortly, according to a person familiar with the matter.

Dowd, 76, represented U.S. Senator John McCain on congressional ethics charges in the “Keating Five” banking scandal in the late 1980s and early 1990s. McCain was cleared in the matter.

In 1989, Dowd’s investigation on behalf of Major League Baseball led to former Hall of Famer Pete Rose being banned from the sport for betting on games while he was manager of the Cincinnati Reds.

Earlier in his career, Dowd served in the U.S. Marine Corps and was part of a U.S. Department of Justice organized crime unit. He went into private practice in 1978. He worked for many years at the law firm of Akin Gump Strauss Hauer & Feld, retiring in 2015.

Along with Kasowitz and Dowd, the other lawyers on Trump’s team so far are Jay Sekulow, a conservative activist with a radio call-in show, and Michael Bowe, a longtime partner in Kasowitz’s firm.

Mueller is investigating possible ties between Trump’s campaign and the Russian government, which U.S. officials have said meddled in the 2016 election.

Russia has denied such interference. The White House has denied any collusion with Moscow.

The special counsel also is looking into whether Trump has sought to obstruct the investigation, a person familiar with the inquiry said on Thursday.

The Senate and House Intelligence Committees are also investigating possible ties between Russia and the Trump campaign.