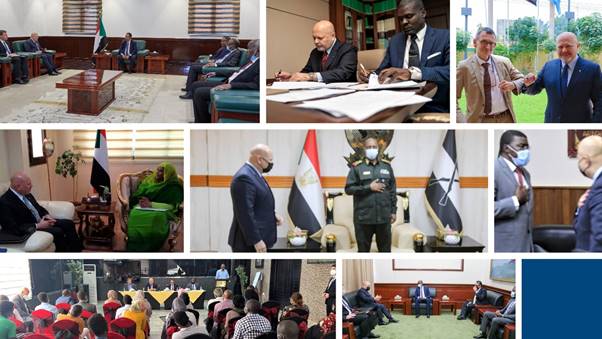 On Friday, 13 August 2021, the Prosecutor of the International Criminal Court (“ICC” or “the Court”), Mr Karim A. A. Khan QC, concluded a week-long visit to Khartoum, Sudan. The visit represented Prosecutor Khan’s first visit to Sudan in his capacity as ICC Prosecutor.

During the course of the visit, Prosecutor Khan held several productive meetings with officials of the Transitional Government of Sudan at the highest levels, and engaged with diplomatic corps and representatives of civil society organisations. Amongst others, meetings were held with General Abdel Fattah Abdelrahman al-Burhan, Chairman of the Transitional Sovereignty Council (“TSC”) of Sudan; H.E. Mr Abdalla Hamdok, Prime Minister of Sudan; General Mohamed Hamdan Dagalo, Deputy Chairman of the TSC; Dr El Hadi Idris, Head of the Sudan Revolutionary Front (SRF) and member of the TSC; General Al-Tahir Hajar, Chair of the Sudan Liberation Forces Alliance and member of the TSC; H.E. Mr Nasredeen Abdulbari, Minister of Justice; H.E. Mrs Mariam Al-Mahdi Al-Sadig, Minister of Foreign Affairs; H.E. Mr Mubarak Mohammad Osman, Acting Attorney General; Mr Volker Perthes, Special Representative of the United Nations Secretary-General for Sudan and Head of UNITAMS, and the Heads of Missions of the United Kingdom, Norway, the United States, The Netherlands, Germany, European Union Delegation, Sweden and the People’s Republic of China to Sudan; as well as the Resident Representative of the United Nations Development Programme (“UNDP”).

The Prosecutor expressed his sincere appreciation to the authorities for facilitating his visit and for hosting him and his delegation, as well as for the good will and cooperation expressed and extended to his Office.

Prosecutor Khan’s decision to travel to Sudan was motivated by various factors, including the nature of the crimes alleged, the rights of survivors, and the fact that this is the first situation referred to the ICC Prosecutor by the United Nations Security Council. During his discussions with the authorities and other stakeholders, the Prosecutor requested that the Government of Sudan further deepen its cooperation with his Office. In this regard, at the Prosecutor’s request, a new Memorandum of Understanding (“MoU”) was signed that includes all individuals against whom warrants of arrest have been issued by the ICC. The Office will be looking to work closely with the Sudanese authorities and other partners in the implementation of this new MoU.

At the conclusion of his visit to Sudan, the Prosecutor held a press conference and engaged with the media, explaining the reasons for his visit and fielded questions from local and international press. “Transfer of any suspect is an important step towards achieving justice but should be preceded and accompanied by substantive and ever deepening cooperation by the Sudanese authorities,“ Prosecutor Khan emphasised, adding that he has requested the authorities to provide immediate and full access to evidence that is pertinent to the Office’s investigations in the situation in Darfur.

The Prosecutor urged swift and greater collaboration to finally bring justice to the people of Darfur. “After almost 17 years since the referral of this situation, the Government of Sudan and the ICC owe to the victims of atrocity crimes in Darfur justice without further delay,” the Prosecutor emphasised.