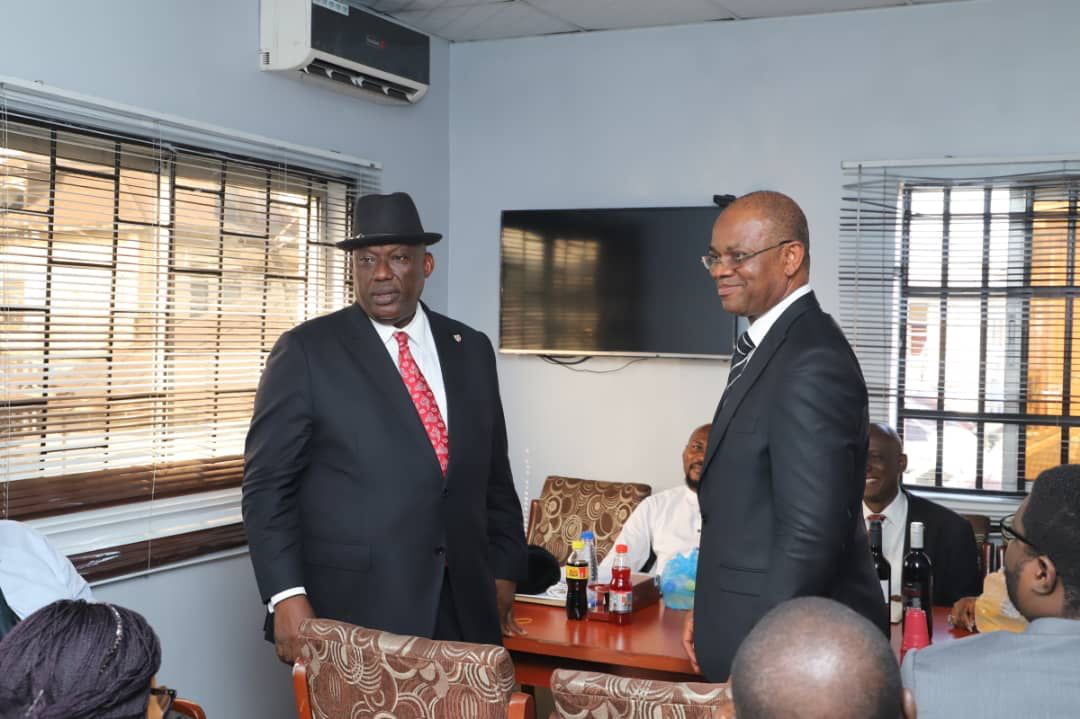 Chief Joe-Kyari Gadzama, SAN; Son of the Soil, Hon. Nimi Walson Jack and others Attend the Monthly Meeting of the NBA, Okrika Branch

The NBA, Okrika branch held its monthly meeting on Thursday, May 26, 2022 at the popular borokiri neighborhood in Port Harcourt, Rivers State.

Mr. Selema Alamina Walton, vice chairman of the Eastern Bar Forum (EBF) and Mr. Edward Ofori, Esq., the social secretary of the branch ushered the Learned Silk; Hon. Nimi Walson Jack, past general secretary of the NBA; Tamunokuro Akuro George, Esq.; Dafenone Akpomudiare, Esq.; Hillary Ayebaifie Ojeke and others into the meeting. The members of the branch were filled with delight as the Learned Silk and his team made their way into the meeting.

While addressing them, the Learned Silk informed members of the branch that he is the pioneer chairman of both NBA-SPIDEL and NBA-SARC. He mentioned that he is looking forward to an all inclusive bar where smaller branches who have been cast aside will be able to take a seat at the Bar. Indeed, this statement made by the Learned Silk captured the hearts of many members of the branch as they nodded in response. His passion for the welfare of young lawyers was brought to fore as he spoke on the essence of mentoring young lawyers to ensure that the legal profession is left in safe hands. He noted that service is the pathway to greatness and as such, the NBA needs a leader who is true to himself and true to all members of the NBA. He gave all glory to God as he mentioned that the grace of God is the foremost factor responsible for his tremendous growth in the legal profession.

Mr. Kalada Nonju, Esq., past chairman of the branch rendered the vote of thanks. He thanked the Learned Silk, Hon. Nimi Walson Jack and other members of the team for gracing the meeting with their presence. Most importantly, he stated that the name “J-K Gadzama” is a household name which requires no introduction as the reputation of the Learned Silk precedes him. He noted that the branch shall account for 99.9% of the votes in support of the Learned Silk’s NBA Presidential ambition.

A son of the soil and past general secretary of the NBA, Hon. Nimi Walson Jack spoke to the credibility of the Learned Silk. He thanked the branch as he recognized the role they played towards pushing him to the NBA national in the past. He assured members of the branch that the Learned Silk is truly a man of his words as they have remained friends for a long time. He noted that the judiciary and the legal profession in Nigeria are currently plagued with certain challenges and as such, the NBA is in need of a leader who can stand up to the current “madness” being faced by the legal profession in the country. He rounded up his speech by stating that although Chief Joe-Kyari Gadzama, SAN is not “mentally mad”, he has “mad ideas” that can be utilized in addressing the current challenges faced by the Bar. Also, Mr. Ogaga Emoghwanre, publicity secretary of NBA, Benin branch was present at the branch’s meeting.

Group photographs were taken at the end of the meeting and members of the branch had the opportunity of exchanging pleasantries with the Learned Silk.