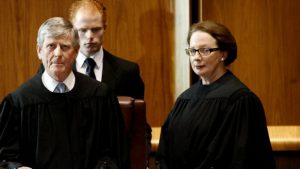 After months of speculation about who would replace retiring chief Robert French, the Turnbull government appointed serving High Court Justice Kiefel to the role on Tuesday.

After much speculation, the Turnbull government appointed Justice Kiefel, the first woman to hold the office, to be chief justice. (Vision courtesy ABC News 24)

Brisbane-based Federal Court Justice James Edelman, who is just 42, will replace her as a puisne judge – a judge other than the chief justice.

Chief Justice French said in March he would stand down in January, ahead of his 70th birthday and in order to allow his successor to be in place for the start of the new year sittings on January 30.

Prime Minister Malcolm Turnbull said on Tuesday “Susan Kiefel’s story is one that is an inspiration”.

The Queenslander left school at 15 and began her working life as a legal secretary before studying law part-time through the barristers admission board.

“She went on after practising at the bar to win a Master of Laws at the University of Cambridge,” Mr Turnbull said.

Justice Kiefel told Fairfax Media she was “deeply honoured by the appointment and very conscious of the responsibilities of the office of chief justice”.

“I hope that I bring to the role my experience – I’ve been a judge for 23 years and I was a barrister for 16,” Justice Kiefel said.

“I’ve been on the High Court for nine years. And of course I’m bringing my experience of the world as all of the judges do.”

The 62-year-old said she “learned to work hard at an early age” but she was “ambitious so I enjoyed it”.

“I absolutely loved my time at the bar, but I always knew that I wanted to be a judge,” Justice Kiefel said.

Mr Turnbull said Justice Edelman was “a different generation to most of the other judges of the High Court” but at the age of 34 the “precocious” Rhodes Scholar was already a professor of law at Oxford.

“He has established himself by practising at the Western Australian bar and indeed at the London bar,” Mr Turnbull said.

In 2011 Justice Edelman was appointed to the Western Australian Supreme Court by his close friend and then WA Attorney-General Christian Porter, who is now federal social services minister.

Last year, he joined the Federal Court based in Brisbane.

The youngest High Court appointment remains former federal Labor leader and Attorney-General Herbert Vere “Doc” Evatt, who joined the bench in 1930 at the age of 36.

Attorney-General George Brandis said Justice Kiefel had emerged as the “overwhelmingly favourite candidate” to replace Chief Justice French following consultation with the state attorneys-general and other leaders of the profession.

A former judge of the Federal Court and Queensland Supreme Court, Justice Kiefel was the first woman in Queensland to be appointed Queen’s Counsel, or silk, in 1987.

When she was sworn in as a High Court judge in 2007, she was greeted by school children waving placards saying “2/7 = a good start”.

The appointment of Justice Kiefel to the top job was widely tipped in legal circles, and comes as a welcome distraction from damaging headlines about the government’s dealings with the former solicitor-general Justin Gleeson, SC.

The real surprise was who would be appointed to fill the vacancy created by Justice Kiefel.

There had been speculation an Adelaide-based judge – South Australian chief justice Chris Kourakis or Federal Court judge Anthony Besanko – would be appointed to the bench in a first for South Australia.

James Allsop, the Sydney-based chief justice of the Federal Court and former president of the NSW Court of Appeal, had also been touted as a contender.

Justice Kiefel is among the most senior judges on the High Court bench. Justices Virginia Bell, Stephen Gageler and Patrick Keane were appointed during the Rudd and Gillard governments.

After her appointment by the Howard government, Justice Kiefel said that she was a “lonely tree” in a forest of men during her early years at the Queensland bar but women were now “part of the landscape”.

Chief Justice French, who was appointed to the top job in September 2008, had previously served as a judge of the Federal Court