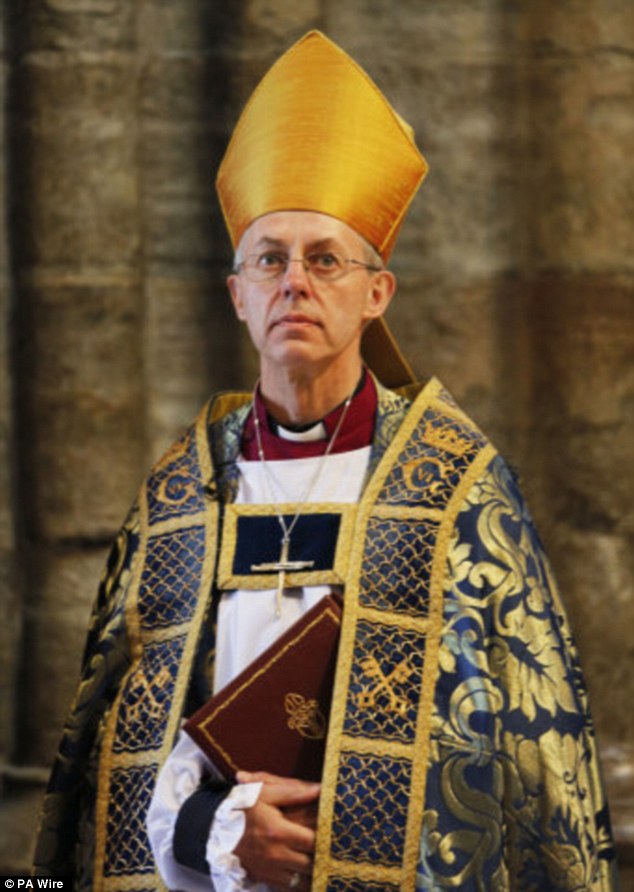 The  Archbishop of Canterbury has discovered that he is an illegitimate son  after taking a DNA test to prove his paternity.

The Most Reverend Justin Welby who became the Arch Bishop of Canterbury on the 21st of March 2013 has just discovered that a man he knew as his father was never his father. He has always believed his father to be Gavin Welby until few weeks ago when a DNA test taken at the instance of the Telegraph showed that his real  father  is Anthony Montague-Browne who who served Winston  Churchill in Downing Street and during his retirement as a private secretary.

After the Telegraph  newspaper discussed its research with the Archbishop, he decided to take a DNA test which came out with the result that there is 99.9779 per cent probability that Anthony is his father.

The Archbishop’s mother Lady Williams of Elvel, has confirmed to her son that she had a liaison with Sir Anthony shortly before she married Gavin Welby the man the Arch Bishop grew to call Father.There are indications that Sir Anthony before he died knew that the Arch Bishop was his son.

Will That threaten Welby’s Position as an Arch Bishop?

If this had happened before the 1950s,it could have threatened Welby’s Position.According to the Canon Law, men born illegitimately were  barred from becoming archbishops. In the 50s a  change in the law  removed that bar, leaving Archbishop Welby safe in his post.

What has the Bishop said?

A PERSONAL STATEMENT BY THE ARCHBISHOP OF CANTERBURY JUSTIN WELBY

In the last month I have discovered that my biological father is not Gavin Welby but, in fact, the late Sir Anthony Montague Browne.

This comes as a complete surprise.

My mother (Jane Williams) and father (Gavin Welby) were both alcoholics. My mother has been in recovery since 1968, and has not touched alcohol for over 48 years. I am enormously proud of her.

My father (Gavin Welby) died as a result of the alcohol and smoking in 1977 when I was 21.

As a result of my parents’ addictions my early life was messy, although I had the blessing and gift of a wonderful education, and was cared for deeply by my grandmother, my mother once she was in recovery, and my father (Gavin Welby) as far as he was able.

I have had a life of great blessing and wonderful support, especially from Caroline and our children, as well as a great many wonderful friends and family.

My own experience is typical of many people. To find that one’s father is other than imagined is not unusual. To be the child of families with great difficulties in relationships, with substance abuse or other matters, is far too normal.

By the grace of God, found in Christian faith, through the NHS, through Alcoholics Anonymous and through her own very remarkable determination and effort, my mother has lived free of alcohol, has a very happy marriage, and has contributed greatly to society as a probation officer, member of the National Parole Board, Prison Visitor and with involvement in penal reform.

She has also played a wonderful part in my life and in the lives of my children and now grandchildren, as has my stepfather whose support and encouragement has been generous, unstinting and unfailing.

This revelation has, of course, been a surprise, but in my life and in our marriage Caroline and I have had far worse. I know that I find who I am in Jesus Christ, not in genetics, and my identity in him never changes. Even more importantly my role as Archbishop makes me constantly aware of the real and genuine pain and suffering of many around the world, which should be the main focus of our prayers.

Although there are elements of sadness, and even tragedy in my father’s (Gavin Welby’s) case, this is a story of redemption and hope from a place of tumultuous difficulty and near despair in several lives. It is a testimony to the grace and power of Christ to liberate and redeem us, grace and power which is offered to every human being.

At the very outset of my inauguration service three years ago, Evangeline Kanagasooriam, a young member of the Canterbury Cathedral congregation, said: “We greet you in the name of Christ. Who are you, and why do you request entry?” To which I responded: “I am Justin, a servant of Jesus Christ, and I come as one seeking the grace of God to travel with you in His service together.” What has changed? Nothing!