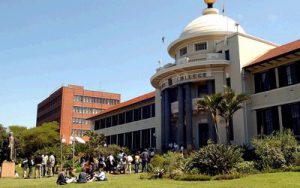 South African police fired tear gas in clashes with students at the University of KwaZulu-Natal on Thursday and arsonists torched a building at another campus overnight as protests over tuition costs spread.

The unrest erupted at a Johannesburg university three days ago after the government announced a rise of up to 8 percent in 2017 tuition fees – well above the inflation rate.

Demonstrations over the cost of university education, prohibitive for many black students, have highlighted frustration at enduring inequalities in Africa’s most industrialized country more than two decades after the end of white-minority rule.

Television footage showed students hurling stones at police at the University of KwaZulu-Natal in the east of the country. Police retaliated with tear gas to disperse the protesters as the two sides engaged in running battles across campus.

“The students attempted to set a building on fire and were pelting motorists and police with rocks,” said Thulani Zwane, police spokesman for KwaZulu-Natal province.

Earlier this month, 32 students were arrested after a law library at the university was torched during protests.

Police said they were investigating arson at the University of Fort Hare in neighboring Eastern Cape province after a building housing university security guards was torched.

“Three rooms in the building were burnt down,” Marinda Mills, police spokeswoman for the province said.

Violent protests last year forced President Jacob Zuma to freeze tuition fees for 2016, but universities said that to do so again in 2017 would diminish academic program standards.

A number of universities including in Pretoria and Cape Town have suspended classes over the nationwide demonstrations.

There was a heavy police presence on Thursday at Johannesburg’s University of the Witwatersrand, the epicenter of the protests against higher fees. Two students arrested there were scheduled to appear in court on Thursday.

Higher Education Minister Blade Nzimande, who announced the 8 percent cap on university fee hikes for next year, said the government would not tolerate threats to lives.

“I will not wait on the sidelines for any further damage to property, injuries to students or ultimately loss of life to occur before acting against violent campuses,” Nzimande said in a statement, without elaborating on what action he would take.

Several staff and students from the University of Cape Town gathered outside parliament, demanding that government play a bigger role in funding university education.

The Treasury said this week it could not confirm if the government would give more money in subsidies to students.