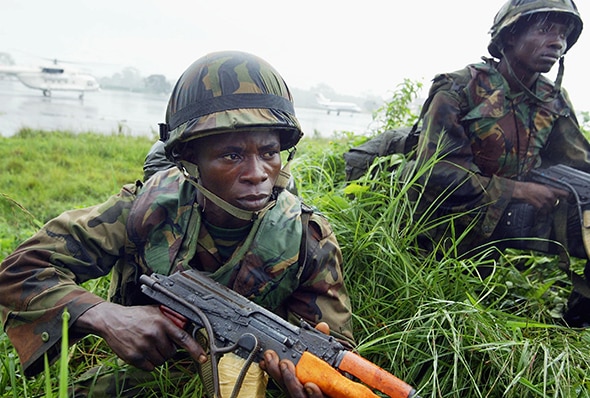 The Nigerian Army, Friday, said that soldiers in the frontline, have the right to demand for proper weapons to fight the insurgents.

According to a statement by the Director Army Public Relations Brigadier General Mohammed Yerima, “on the issue of ‘obsolete weapons’ as reported in some media, the position of Army Headquarters is that soldiers have right to demand for proper weapons to prosecute the operations. However, the Federal Government was making concerted efforts toward deploying new fighting equipment to augment the existing ones in the Theater of Operation”.

The Army, also denied reports of protest by soldiers over posting to certain location in the theatre of operation but “mild complaints” by few soldiers.

It said that, “preliminary investigations by Theatre Commander, Operation Lafiya Dole, Maj. Gen. Farouq Yahaya, revealed that what some media reports described as protest was a mild complaints by few soldiers of Mobile Strike Team (MST), deployed for Exercise Tura Takaibango in the frontline of Operations”.

According to the statement, “our attention has been drawn to an unsubstantiated reports going round on the mainstream media that Soldiers of an unidentified battalion in Operation Lafiya Dole have protested their posting to a location in the Theatre of Operation.

“The reports also claimed that the aggrieved soldiers, besieged the headquarters of the Theatre Command in Borno State, shooting sporadically into the air on Thursday to protest over alleged unpaid Operational allowances as well as obsoleted equipment.

“For the records, The Headquarters Theatre Command Operation LAFIYA DOLE wishes to state that the claims were unsubstantiated and did not represent the true situation of the incidents”.