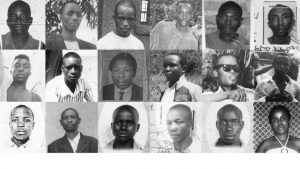 The government in Kigali denies that any extrajudicial killings took place.

Most of the alleged victims were accused of theft – in one case stealing bananas.

Others were accused of smuggling marijuana, illegally entering the country, or using illegal fishing nets.

They believe it is part of an official strategy to “spread fear, enforce order and deter any resistance to government orders or policies”.

One witness described what happened next:

“When the meeting was finished, the soldiers walked Fulgence to a small field near a banana plantation. There were many of us following; some were primary students.

We wanted to see what would happen… A soldier told him to stand up and walk, and another soldier told us to leave. At that moment, I heard three shots.”

The report by HRW also alleges that, in another case, two men were killed by civilians after local officials encouraged them to do so.

In a tweet, Rwanda’s Minister of Justice Johnston Busingye rejected the report outright:

A screengrab of the Rwandan Justice Minister’s tweet, which reads: ‘My response to [the] HRW report. It is clearly fake. HRW is so desperate for attention. They have been duped, yet again, wilfully.’

Mr Busingye has declined the BBC’s request for an interview.

HRW has previously accused Rwanda of rounding up thousands of street children and sex workers and putting them in illegal detention centres – the government also denied these allegations.