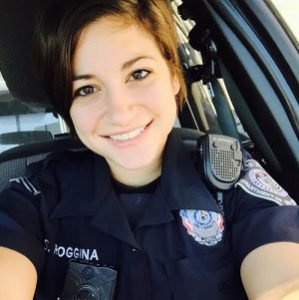 A rookie cop from New Jersey was busted for drunk driving — and caught in a dashcam video trying to use her badge to weasel out of the arrest.

Stephanie Roggina, an officer with the Scotch Plains Police Department, led police on a brief chase and failed to pull over on Aug. 26, 2016, in Flemington, according to the Trentonian.

In the dashcam video, Roggina can be seen swerving along the road and apparently hitting a guardrail before she’s pulled over by Lt. Scott Crater.

“I’m a cop,” Roggina slurred to Crater after being handcuffed. “I work in Scotch Plains. My number is 140.”

Crater responded, “Well, then you should know better, right?”

At another point, Roggina appeared to drop the name of her former boss, retired Scotch Plains Police Chief Brian Mahoney.
“Do you know Brian?” she asked Crater.
Roggina’s arrest had been previously reported, but the shocking recording was posted by the Trentonian after the newspaper sued to make it public.

She joined the Scotch Plains department in June 2016 and was immediately suspended without pay, according to the paper.

Roggina, 26, was charged with a slew of offenses — including driving while intoxicated, eluding and reckless driving — stemming from the incident.

She was indicted on one count of resisting arrest but pleaded guilty to a downgraded charge of disorderly conduct. Her no-jail sentence included paying a small fine.

The outcome of the other charges and her current status with the department are not clear.