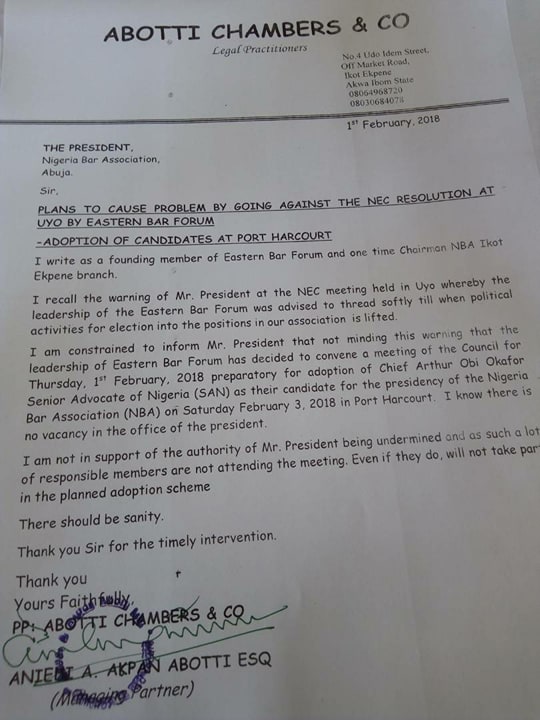 A Founding member of the Eastern Bar Forum(EBF) and a former Chair of the Nigerian Bar Association, Ikot Ekpene has disassociated himself and many other members from the adoption plan of the association. Some members of the Eastern Bar forum will be arriving Portharcourt today for a meeting where they intend to adopt a candidate for the position of the NBA President.

In a letter dated 1st of February 2018 by  AAA Abotti to the President  of the Nigerian Bar Association(NBA),he stated that responsible members of the EBF will not be attending the meeting and if they do, will not participate in the adoption process.

His letter to the President is as follows

I write as a founding member of Eastern Bar Forum and one time Chairman of NBA Ikot Ekpene branch.

I recall the warning of Mr President at the NEC meeting held in Uyo whereby the leadership of the Eastern Forum was advised to thread softly till when political activities for the election into positions in our association is lifted.

I am constrained to inform Mr President that not minding this warning that the leadership of Eastern Bar Forum has decided to convene a meeting of the Council for Thursady 1st February,2018 preparatory for adoption of Chief Arthur Obi Okafor(SAN) as their candidate for the presidency of the Nigerian Bar Association(NBA) on Saturday February 3,2018 in Portharcourt.I know there is no vacancy in the office of the President.

I am not in support of the authority of the President being undermined and as such a lot of responsible members are not attending the meeting .Even if they do,will not take part in the planned adoption.