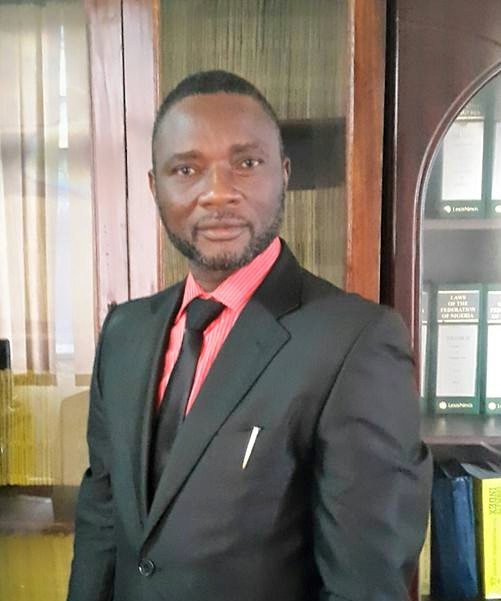 I woke up last Sunday morning feeling tired and dehydrated after attending a prestigious dinner put together by the NBA Section on Business Law in collaboration with NBA Port Harcourt Branch as part of the programmes lined up for the NBA Section on Business Law Seminar which held in Port Harcourt on Friday, the 3rd of November, 2017. At the click of an icon on my device, i discovered that the device was overwhelmed with notifications from various applications prominent of which were the notifications from whatsapp. On a further click of another icon, i saw the above publication with a name Anthony Atata as the author published in an online tabloid Courtroom Mail.

Upon reading and re-reading the said publication, I felt compelled to do a rejoinder on it not for the sake of promoting the interest of any group or person(s) within the EBF but to correct and dispel the distotorted facts spewed based on blatant ignorance and/or intended mischief of the writer on issues pertaining and concerning the Eastern Bar Forum.

On 28th of October, 2017, the Eastern Bar Forum held its usual quarterly meeting at Osborne La Palm Hotel, Abakaliki, Ebonyi State. After an extensive and exhaustive deliberation on national issues and other issues concerning the Nigerian Bar Association, it came up with some definite resolutions which inter alia includes the resolution to boycott the review of the NBA Constitution as proposed by the A.B. Mahmud led National Executive. The Forum did not resolve to urge its member branches to boycott the constitutional review for the sake of it but the Forum arrived at its decision based on the fact that the purpose of the amendment was unclear to all and sundry a fact which Anthony Dasuki Atata also unequivocally admitted in his treatise. It must be placed on record that up till this moment, the NBA has not come up with the reasons for the proposed constitutional review and which body approved the decision to review the constitution.

Mr. Anthony Atata posited that EBF by its resolution has blown away an opportunity and decided to kick the ball over the bar by its decision to boycott the proposed review of the constitution. But the likes of Mr. Atata should be reminded that the EBF is not averse to a well intentioned review of the NBA Constitution as there exist painful and frustrating provisions in the constitution that needs an imperative review. The Eastern Bar Forum as an assemblage of proactive, dynamic and legalistic minds that respects the rule of law observed that it will be practically impossible to carry out an holistic review of the constitution under the present dispensation. Section 20(1) of the 2015 NBA Constitution provides as follows” this constitution shall not be amended except at an Annual General Meeting of the Association by 2/3 majority of those present and entitled to vote, provided that 2/3 of the branches of the Association are represented AND provided that at least sixty(60) days notice of the proposed amendment shall have been given to the General Secretary who shall have circulated same to delegates at least thirty(30) days before the proposed amendment is tabled for discussion at the Annual General Meeting “ From this provision, the question that should agitate any discerning mind is whether a review or whatever name so called of the constitution can be carried out under the remaining seven months tenure of the A.B. Mahmud led National Executive? The next Annual General meeting of the Association comes in August, 2018 and at that meeting the A.B. Mahmud and his Exco will be saddled with the onerous task of giving account its stewardship for the two years he held sway at the NBA House. Will that be the right time to go into the daunting business of re-writing the constitution? The answer to these questions is patently NO and it was based on this premise and other sundry reasons that the EBF took its decision.

Anthony Atata submitted that Section 2.2(d) forms the crucible of his write up. Section 2.2(d) of the constitution provides that “Where a position is zoned to any particular geographical zone, the position shall be rotated and held in turn by the different groups and/or sections in the geographical zone” He posited that the biggest problem EBF and other pressure groups will have to grapple with is not the Universal Suffrage now practiced by the NBA but the management and application of Section 2.2(d) since the constitution does not give any legal backing to these regional groupings to decide which of the different groups/sections in the zone will present candidates for elections. Ruminating through the postulations of Atata brings to the fore his lack of knowledge of the modus of the EBF. I do not have the locus to speak for other regional groups but what cannot be taken away from the EBF is its ability to always rally round is adopted candidate, be it in a delegate election or universal suffrage. The custom and convention of adoption of candidates in the EBF is one that is sacred to the Forum. Candidates for elections are not in any way cajoled or forced to partake in the adoption process but ultimately the adopted candidate most often coast home to victory. In the rare instances where an adopted candidate from the EBF has lost an election, such loss was never to another EBF candidate who refuses to submit or lost in the adoption process and history will not be re-written now if any of the potential candidates for the forthcoming NBA elections opts out of the adoption process.

The article by Anthony Atata went further to state that EBF has never in its 13 years history endorsed any candidate based on any convention whatsoever and that the argument of an established convention of turn by turn in the EBF is absolutely incorrect. This is really amusing to say the least. It portrays the nadir of the ignorance of the writer on EBF or a deliberate attempt to twist history and misinform members of the Bar to suit a vested interest. In the 2002, consequent to the colossal loss members of the Bar from the East suffered in the NBA elections, an urgent need arose for members of the Bar from the old Eastern Region to come together under a common platform for the purpose of inter alia streamlining and projecting its members political ambitions within the NBA. This noble action led to the formation of the Eastern Bar Forum.

The first test of the Forum came into play in the 2004 NBA Elections. Several candidates from the Forum jostled for positions in the said elections and in order to have an orderly, the EBF embarked on adoption of candidates. It was in that vein that Barth Anochie Okoye Esq was adopted for the position of Publicity Secretary as against Golden Tamuno Esq, Hon Nemi Walson Jack was adopted for the office of General Secretary against Goddy Akonani. Other adoptions that were done in the said elections were Hon Kemasoude Wodu for Legal Adviser and Golden Ama Ihuoma for 3rd Vice President. When we fast forward to the 2006 elections, Chris Uche SAN and Olisa Agbakoba SAN all from the East indicated interest to run for the position of President. The EBF in line with its adoption policy adopted Olisa Agbakoba SAN as its candidate for the said elections. It must be pointed out that no one from the South South states of the EBF came forward to run for the presidency in 2006 with Hon O.C.J. Okocha MFR, SAN, JP from the South South having occupied the position in 2000. In the 2010 elections, Chief Okey Owhonda and Chidi Morka indicated interest to run for the office of General Secretary. The EBF adopted Chief Okey Owhonda as its candidate. The EBF tradition, custom and convention of adoption cascaded down to the 2012 elections when it again fell on the East to gun for the presidency. Chief Chris Ngige SAN and Chief Okey Wali SAN were the candidates of the East for the elections, as it is customary an adoption exercise was conducted and in a meeting held in Ahoada, Rivers State, Okey Wali was adopted. Also in 2012 three candidates jostled for the position of General Secretary in the EBF adoption exercise and they are Joyce Oduah, Barth Anochie Okoye and Mazi Afam Osigwe. At the end of the exercise, Mazi Afam Osigwe emerged as the adopted candidate and that catapulted his becoming the General Secretary of the NBA. Lets come to the 2016 NBA when the 2015 constitution was the grundnorm. The position of 2nd Vice President was zoned to the eastern zone. Monday O. Ubani, former Chairman Ikeja Branch and Stanley Chidi Imo, former Chairman Owerri Branch indicated interest to run for the position, the EBF conducted an adoption and the present 2nd Vice President was adopted. Ditto for the position of Asst Publicity Secretary where Chuks Mbamala was adopted over Seth Nwokolo which saw Chuks Mbamala finally emerging as the Assistant Publicity Secretary of the NBA For anyone to now posit that EBF had never done adoption of candidates for elections since its existence smacks of mischief, misinformation and cheap blackmail. A candidate who decides to opt out of the adoption process is free to do so as EBF has never made it a compulsion for anyone to submit for adoption even though it is so provided in Article 11. 5 of the EBF Constitution. All the potential candidates for the office of the presidency in the 2018 elections are all members of the EBF, if anyone of them decides to opt out of the adoption process which some have benefited from to succeed in previous elections does not in any way derogate the process.

The EBF as presently constituted is made of up two zones ie the Southeast and the Southsouth zones and this is even evident in the internal elections of the EBF. I have exhaustively dealt on this in my last write up titled’ NBA, EBF AND THE BEST FOOT FORWARD FROM AKWA CROSS’ published by thenigerianlawyer. But for the avoidance of any doubt, the principal offices of Chairman and Secretary is by its convention rotated between the Southeast and the Southsouth . Mr. Atata’s position that some lawyers have started agitating that the EBF is presently made of four group of old Imo, old Anambra, old Rivers and old Cross Rivers is a kite being personally flown by him with the prompting of his preferred candidate. It must be emphatically stated such agitation has never reared in the EBF. Desperate attempt to cause a conflagration or schism within the ranks of the EBF will surely come to nought as the EBF will always give up the good for the great.

Whatever the intentions of Mr. Atata and all those who may want to share his views are, they must remember the words of the Isreali Prime Minister Benjamin Natanyahu who stated that best intentions does not prevent worst outcomes.

Long live the NBA and may God bless EBF.