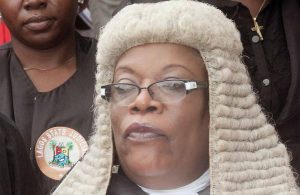 The Chief Judge of Lagos State, Justice Olufunmilayo Atilade has called for the reconsideration of the Lunacy Act of 1958.

She also called for appointment of more judges to aid quick dispensation of justice and reduce the workload of judges.

The CJ made this assertion at the Bar and Bench Forum held at the Foyer, Lagos High Court, Igbosere as part of activities to mark the 2016/2017 legal year‎.

Justice Atilade said the Lunacy Act of 1958 should be urgently reconsidered, noting that though new laws such as the Mental Health Bill, 2013 and 2009 coupled with the Nigerian Mental Health Bill of 2013 has been used to replace the Lunacy Act, yet the new laws ‘remained grossly inadequate and hopeless to deal with the situation in Nigeria.’Her words: “Authority should come up with solutions and put in place necessary structures to address stigmatization of persons with mental illness.‎”

Also the CJ advocated the appointment of more judges for the state judiciary,so as to reduce the workload on the present judges in the state.