I can’t cross the Golden Jubilee Bridges in London anymore. 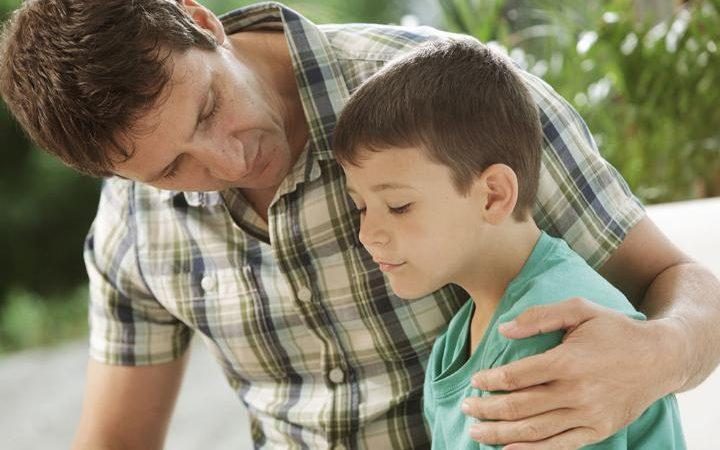 During the last full day I ever spent with my son, Henry, we walked across the bridge together. We were both in pieces. I was trying not to show my emotion – he could not hide it. Henry was only six-years-old and his life was being turned upside down.

Halfway across the Thames, he burst into tears, threw his arms around my legs and refused to let go. Eventually, of course, he did let go. As I had to as well – because it turns out that Henry is not actually my son.

When I met my first wife, Belinda in 1998. We shared a dream to have a child but we hit wall after wall. I had to get a reverse vasectomy. She had to go through IVF treatment. I supported her through the whole process, while helping her to set up her own business.

Eventually, after many trips to different fertility clinics, Belinda became pregnant in the summer of 2004. I was overjoyed.

I can still remember the first moment I saw my son. We were in the hospital for a scan, and there he was, my boy, my son. It was one of the most profoundly emotional moments of my life.

And it still is – for different reasons. I now know that as I was beginning my lifelong bond with the image on that screen, my then wife was sitting on the hospital bed next to me wearing a poker face. She knew I had no reason to feel the way I did to that child. She knew I would never be his real, biological parent. And yet she said nothing.

Since then, I’ve often asked myself what was going on inside her head at that moment. But, of course, at that time I knew no better.

Years passed and Belinda and I naturally drifted apart. We divorced in 2007. Throughout the process, I was a loving and present father to my beautiful son, Henry. It remained that way for five and a quarter amazing years. But when I finally moved away from the area and requested alternating weekend contact, Belinda resisted. It was these actions that pushed me to file a contact case against her.

“Our justice system is skewed against paternity fraud victims, who undergo incredible trauma with little to no support”

Looking back, as the case progressed, I should have sensed that something was wrong. Henry began calling me by my first name rather than “Daddy”. I remember trying to explain to Henry that “Mummy and I are just trying to sort out when we’ll see you”. His little eyes looked so worried and sad.

I didn’t know then that he had been told that I was not his real father.

That accolade belonged to Paul. Paul, who had been in Belinda’s life for years, was her ex and had been spending time with Henry behind my back for years.

I had no idea how deep his deception ran until I received Belinda’s  phone call. It was mid-2011 and I was in Somerset on a weekend retreat. Belinda had just received the court papers formally notifying her that I had begun proceedings on a contact case.

I was in the garden. Slowly, she drip fed me the truth. Spluttering down the phone, she dismantled my life in under five minutes. She believed that Henry was not my son. She had plotted and arranged a secret trip with Paul to a leading fertility clinic in Spain nine months before Henry’s birth. She had swapped my sperm for his.

I went completely numb. I couldn’t process what I was hearing; I could think only of Henry.

When he had been born, Belinda was under anaesthetic – it was a caesarean birth. I had been the first person to hold Henry properly. As his eyes and my eyes had met, we had shared a profound moment that made the joy I’d felt during the scan pale into insignificance. It was I, not Belinda – and certainly not Paul – who made that first human connection.

It was three weeks before a DNA test was completed and Paul was confirmed as the father. I was devastated. How could the fertility clinic simply have swapped the sperm without questioning her actions or informing me?

And then, once the truth was out, I began to be erased from the picture. Like a footballer being substituted, Belinda made it clear that I was to leave the pitch and make room for Paul. I watched on from the sidelines as he took my position as the father of the family.

We went to court again – twice. The first time was a Contact Case: the Judge ruled that I had no legal right to see Henry. Effectively, he gave Belinda permission to cut me out of the picture entirely.

The second case was last year. Belinda was convicted of Parental Deceit and Fraud in the High Court, but I lost my two year battle to acquire a contact order for my ‘son’. In what I consider a smaller loss, I was also not awarded the £60,000 repayment of child maintenance, despite the fact that this was fraudulently obtained.

Like other victims of paternity fraud, I feel deeply damaged by the experience. I find it difficult to be in a lift with a small child, or in Starbucks surrounded by mothers and toddlers without freezing with profound sadness.

My situation is less rare than you may think. Only last week, research from a leading European university suggested that 1 in 50 western men could be unknowingly raising another man’s child. And just the other day the Archbishop of Canterbury, Justin Welby, was caught innocently in the crossfire of a paternity scandal.

We could fix these situations with simple changes. DNA paternity tests at birth, for example, would help. Penalties for commiting paternity fraud could also be raised: from the absurdly small £10,000 to at least £30,000. And Children and Family Court Advisory and Support Service (CAFCASS) should be required to support all members of the family to ensure that the original father-child relationship is not lost.

Finally, premeditated parental fraud is deliberately deceitful and results in emotional damage to minors. Surely it should be tried in criminal court?

As it stands, our justice system is too lenient. It’s skewed against the paternity fraud victim, who undergoes incredible trauma with little to no support.

I have been lucky: since my experience, I’ve remarried and now have step-children. However, many victims are not so fortunate. Some victims have to discontinue their careers, or endure great psychological difficulties, whilst others simply can’t face seeing their ‘children’ again – even if they may be allowed to.

The only contact that I have with Henry now is a card that I send every month. My family write nice stories and other things for him, to remind him that he could still be a part of this family if he wanted. We never hear back. When I ask to see him at Christmas or on his birthday – even for five minutes to give him his present – his mother will email me back saying the same thing every time: he will get in touch if he wishes to.

Which brings me back to the Golden Jubilee Bridge. I still can’t even pass by that spot without welling up, but I’m not upset for me anymore – I’m upset for Henry. I think how he must have been feeling that day, so confused and alone halfway across the Thames.

As painful as I found the process, words truly fail me when I try to describe how toxic these situations can be for our children.

*All names have been changed

4 thoughts on “Paternity Fraud on the Increase-Are you sure that child is yours? Read this”