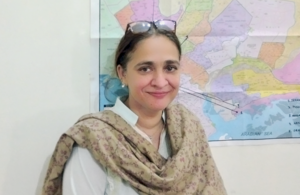 Pakistani lawyer and activist Tahera Hasan received the Commonwealth Points of Light Award for her efforts promoting the wellbeing of orphaned, abandoned and stateless children.

Points of Light Awards are given to outstanding individual volunteers who are making a positive change in their community.
Having been a strong supporter of adoption, Hasan specialises in family law and custody cases. She founded the Imkaan Welfare Organisation in 2012, which now runs a shelter and recreational centre for orphaned and abandoned children in Karachi’s Machar Colony, a squatter settlement home to nearly 700,000 people. Hasan has also set up a mother and child healthcare centre there.
In addition, Hasan helps in the adoption of orphans and stateless children, helping reduce both infanticide and child abandonment. Imkaan, she says, was found on the principle that “each and every child not only has the right to live but to thrive”.
Tahera Hasan said:

It is an honour and privilege to receive the Points of Light Award. It is a recognition for the work of all those involved on a day-to-day basis, highlighting and fighting for the rights of stateless and marginalised communities in Pakistan. The right to citizenship, identity and more specifically children’s rights, is a neglected subject. This award goes a step forward in bringing these issues to the forefront.

Tahera is making a big impact on the lives of some of the most vulnerable children in Pakistan. This recognition of her work is a testimony to the long-standing and deep ties that UK, Pakistan and other Commonwealth nations share.