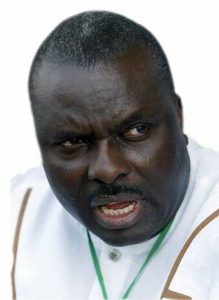 The former Governor of Delta State, James Onanefe Ibori who was released last month from prison in the United Kingdom (UK) has arrived in Nigeria. Chief James Onanefe Ibori Iberia whose flight British Airways landed in Abuja some hours ago is said to be on his way to his hometown, Oghara in Delta state. Vanguard learnt that Ibori’s flight British Airways landed at the Nnamdi Azikiwe International Airport, Abuja at 5.37am on Saturday. Official said that he was picked up by some people and is expected to visit his hometown, Oghara in Delta State at about 11am The official said he could not confirm the identity of the people that picked Ibori up from the airport. Ibori was released from British prison in December after serving half of his 13-year sentence, taking into account pre-trial detention. “What happens in African politics – you are in it until you die,” Ibori told Reuters in London on Tuesday. “I am a politician, I will always be a politician. I play the politics in my party and in my country for the good of my people,” he said after a court hearing, part of ongoing legal proceedings in his case. Asked if he would run for office again, Ibori said he was barred from doing so for 10 years because of his conviction, but that he intended to appeal to have that conviction overturned. The appeal would centre on an allegation, made by one of Ibori’s former associates, that a British police officer had taken bribes in return for inside information on the case before Ibori’s conviction, and that prosecutors had covered it up. British police say the allegation was investigated, resulting in no arrests or charges. The state prosecution service says material supporting the allegation exists and it initially failed to disclose that to Ibori’s defence team, but it is confident Ibori’s conviction remains valid. Court proceedings are ongoing.