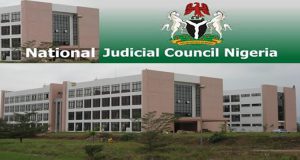 This is contrary to the position separately expressed by the NJC and its Chairman, the Chief Justice of Nigeria, Justice Mahmoud Mohammed, since the Nigerian Bar Association made the call for the suspension of some judges recently arrested by the Department of State Service on allegations of corruption.

It states in its section 2.2.3 that the Judicial Discipline Regulations may specify among other 16 items, the procedure of investigation of a judge, powers of council to order a review and composition of review body, and powers of interim suspension by NJC.

The NJP states in part, “The National Judicial Policy ascribes much premium to judicial accountability and ethical conduct in judicial office.

“The National Judicial Regulations may specify, among other things:

“Who may make a complaint;

“Time within which a complaint could be made from date of the event or matter complained of;

“Registration procedure of the complaint;

“Form of a complaint;

“Reference of complaints for investigation and composition of investigating entity;

“Terms of reference of such investigating entity or committee;

“Powers of Council to order review and composition of review body.

“Circumstances in which council may order a review;

“Powers and procedure of the review body; and

“Powers of interim suspension by Council.”

But the NJC had said acting in line with NBA’s suggestion by suspending the arrested judges without receiving petitions against them and probing the petitions,  would violate section 158 of the Constitution.

“Preparations of amendments to the Judicial Code of Conduct as the need arises.

“Monitor and report on laxity by judicial officers in observance of ethical standards in the performance of judicial duties.”

The committee is headed by Kutigi, who was the Chairman ‎of the last National Conference held in 2014.

In his speech during the event, Justice Musdapher, said absence of a national judicial policy had led to a disjointed development of the judiciary.

He said, “The absence of a National Judicial Policy has resulted in a disjointed development of the judiciary.

“It is certainly time, given recent events that brings to the fore the importance of the third arm of government in the high expectation reposed in it by every Nigerian

“The National Judicial Policy provides a statement of intent that will better improve us and protect our institutions and the integrity of the Nigerian judiciary.”