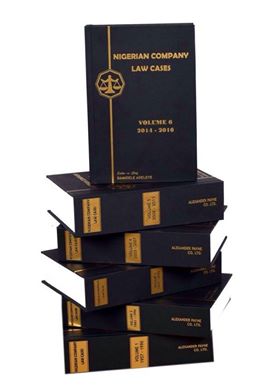 Courtroom mail has tipped The Nigerian Company Law cases (NCLC) as one of the best law books  of 2016. The NCLC which hit the market was well received by many corporate lawyers who now have a compendium and current book in company law decisions since 1957.

The Nigeria Company Law Cases (NCLC)  a six volume compendium of Company law cases since 1957 has hit the market with excitement. The book edited by the Law firm of Adeleye & Adeleye and published by Alexander Payne Co. Ltd is a specialized Law report. According to the Editor-in-Chief, Bamidele Adeleye, the Law Reports is a product of 4years of intensive research. It covers judgments of courts, especially the Court of Appeal and Supreme Court on Company Law cases from 1957-2016.

The NCLC comes in six (6) volumes of over 6,000 pages. It is intended to be and in fact, it is a one-stop shop on Court judgments on company Law cases and disputes arising from the interpretation, application and operations of the Companies and Allied Matters Act Laws of the Federation 2004 and its predecessor, the Companies Act 1968.Reported cases in the volumes  cut across  major areas/ topics on Company Law including the qualifications, duties, and powers of Company Secretaries, Company Directors, Liquidators, Receiver /Managers and Shareholders.  The NCLC is a veritable research material for academic lawyers because it covers judgments of courts from the Colonial era to the Independence era to the Republican era, to the Military era and now. For lawyers in practice, it is quite useful. The judgments are cited as authorities to support their legal positions. In-House solicitors find NCLC very useful while writing legal opinions.