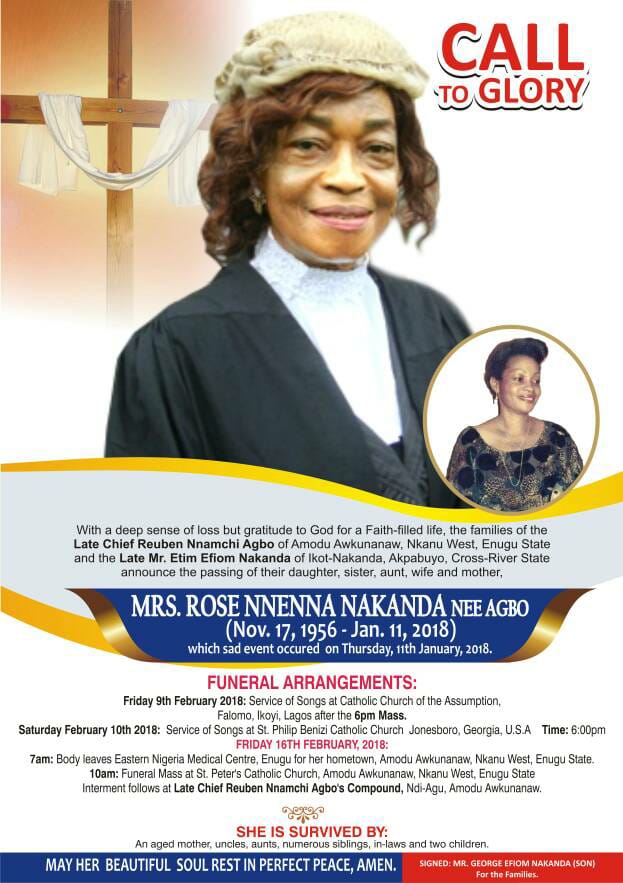 The members of the Nigerian Bar Association,Lagos branch were thrown into grief on the 11th of January 2018 when the news of the demise of a former treasurer filtered in.Rose Agbo was the treasurer of the branch from 2007-2009 and was dedicated to the growth of the bar and the legal profession.

She was born in November 1956 and is survived by a mother,uncles and a daughter who is a lawyer; Nakanda Ekanem. The programme of her funeral has been released by her family to the Lagos branch of the NBA and the chairman,Chukwuka Ikwuazom has released a statement below

“Learned Seniors and Colleagues, we have now received the programme for the funeral of our late member, Mrs Rose Agbo, who passed on a few weeks ago. As you are aware, Mrs Agbo was a dedicated member of the Branch and served the Branch in the role of Treasurer. She remained active at the Bar until she became ill and could no longer participate in the affairs of the Bar the way she would love to. We are greatly saddened by her passing and our deepest condolences go to her family and in particular, our dear friend and colleague, Ekanem, her daughter. According to her funeral programme, there will be a service of songs for her tomorrow, Friday, the 9th of February at 6 pm at the Church of the Assumption, Falomo, Ikoyi. We urge as many of our members as can, to attend the service of songs to pay our respects to our dear departed colleague. The Branch bus will be available to transport members from the Lagos High Court, Igbosere to the Church. The bus will depart Igbosere at 5:30 pm. Further announcement on the burial which takes place in Enugu State on the 16th of February will be made in due course. Kind regards. Chukwuka Ikwuazom (Chairman, NBA Lagos Branch).”