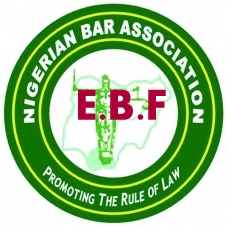 In a few days, the Eastern Bar Forum(EBF) will converge in the oil city of Portharcourt and it is believed that a candidate out of the five running for the Presidency of the Nigerian Bar Association and other positions will be adopted by the group .There are also strong indications that the adoption may not happen.

The EBF was founded in 2004 to cater for lawyers  from Rivers,Balyelsa, Abia, Imo, Anambra, Cross River,Akwa Ibom, Enugu and Ebonyi and protect their interest in the NBA.Though less than 10% of Lawyers in the country from that region are registered members of the association, it has managed to keep itself afloat.

In 2006 Olisa Agbakoba SAN, Chris Uche SAN and Funke Adekoya SAN ran for the position of the N.B.A president.

Agbakoba and Uche came from states that are presently in the East while Mrs. Adekoya came from the West. EBF which was young at the time with a few members mobilized support for Agbakoba not because of any convention but because it was politically expedient to make sure that an outsider in the name of Mrs. Adekoya did not take it away since two people from the East were in the race. Chris Uche was left in the cold. Until today, the EBF has never had reasons to choose any candidate based on any convention. If they do that in Portharcout this weekend, it will be the first in 12 years.

Some lawyers who have sympathy for EBF have argued that in 2012 in the election between Okey Wali SAN and Emeka Ngige SAN, the EBF adopted Okey Wali over Ngige because of the “turn by turn convention”. That is grossly incorrect. In the 2012 presidential election of the N.B.A, the N.B.A at the time was opposed to adoption of candidates by pressure groups. Emeke Ngige did not put himself out for adoption so Okay Wali became the sole candidate for the election since he put himself forward for adoption. According to EBF at that time, Okay Wali was the only candidate that they knew since he was the only one that came forward. There was no opportunity to give reasons why one was chosen over the other since they did not stand side by side for adoption.

Unfortunately, recently some lawyers have started changing the narrative that Okey Wali was chosen over Ngige because of a convention that is obviously not in existence. Again, the question now is, how could you have chosen one candidate over the other when indeed there was only one person for consideration? Another pertinent question is “When exactly was this convention entrenched?”

In my view, for an action to qualify as a convention, it must have at least happened. The so called convention of turn by turn has never happened in the history of EBF. The EBF has never in its history put out a Presidential candidate on the basis of the so called turn by turn convention which according to them provides that the position will be alternated between Igbo speaking members and OTHERS. However, if the EBF says that they want to start it now, it is a different ball game and it will raise many questions which will include the question as to how many sections/interests actually make up the EBF and what will constitute fairness in alternating the position.

Recently, some lawyers have started the agitation that the EBF as presently constituted is actually made up of four groups namely old Imo state, old Anambra state, old Rivers and old Cross River state. Since the recent history of the association, old Anambra has produced three presidents, Old Rivers has produced two presidents, old Imo has produced one while old Cross Rivers has produced none.  They argue that technically, 100% of those who have been presidents of the N.B.A from the region are all of Igbo origin and no one from Ijaw, Efik, Ibibio, Anang, Kalabari etc have been supported to attain the position. That line of argument is gaining popularity by the day.

Some hardliners in EBF have argued strongly that the zones within the association are recognized only on the basis of Igbo and non Igbo states. However, some who are not faithful members of the EBF have argued that the intent of those who drafted the constitution of the N.B.A. or even founded the EBF was to strike an ethnic balance. They argued that the use of sections and geographical interest as used in the N.B.A constitution was a mere diplomatic approach not to categorically import tribalism N.B.A elections.

In support of the argument that the turn by turn claim is faulty, some lawyers across the country who have taken time to study the EBF have discovered that, even if there was such an agreement, there are two very important positions in the NBA; The secretary and the President. If indeed a turn by turn agreement existed, how come out of the five secretaries from the region in recent past, only one came from outside Igbo speaking. Eddy Mark out of Obi Okwusogu,  Philip Umeh, Emeka Obegolu and Afam Osigwe. Even when Joyce Oduah a woman from Akwacross though married from Anambra contested, she was never adopted.

That is not fair on AkwaCross lawyers who have been left in the cold for too long.

This sentiment is really playing in the minds of lawyers from other ethnic groups in the west and North who feel that the system in the EBF is skewed against Paul Usoro SAN and the people of Akwa cross. Though this sentiment is playing positively and adding value to Paul Usoro, the top brass of Akwacross lawyers who were conspicuously missing at the last meeting in Abakaliki are advocating that the EBF jettison the issue of adoption and float the election by allowing all the candidates to run. They are also saying that adoption will aim to exclude the best brands from the race. The hand writing on the wall has shown that Paul Usoro SAN,a successful lawyer who practically grew Nigeria’s telecom legal framework and Prof Ojukwu, a renowned Professor will not be adopted. This will not go down well with the rest of the lawyers in Nigeria who are now progressive minded.

However, the good news is that as at the time of writing this, information from the grapevine has it that three of the candidates did not put themselves out for adoption meaning that no matter what the EBF does this weekend, lawyers will still enjoy the option of choosing from all the candidates presently in the race.

That simply means that if the EBF this weekend goes ahead with the adoption of a candidate when there is no threat from any outsider and in this era of universal suffrage, it may not only  amount to an exercise in futility, it will set the EBF on a dangerous sail to the rocks especially if the candidate they didn’t adopt wins the election.