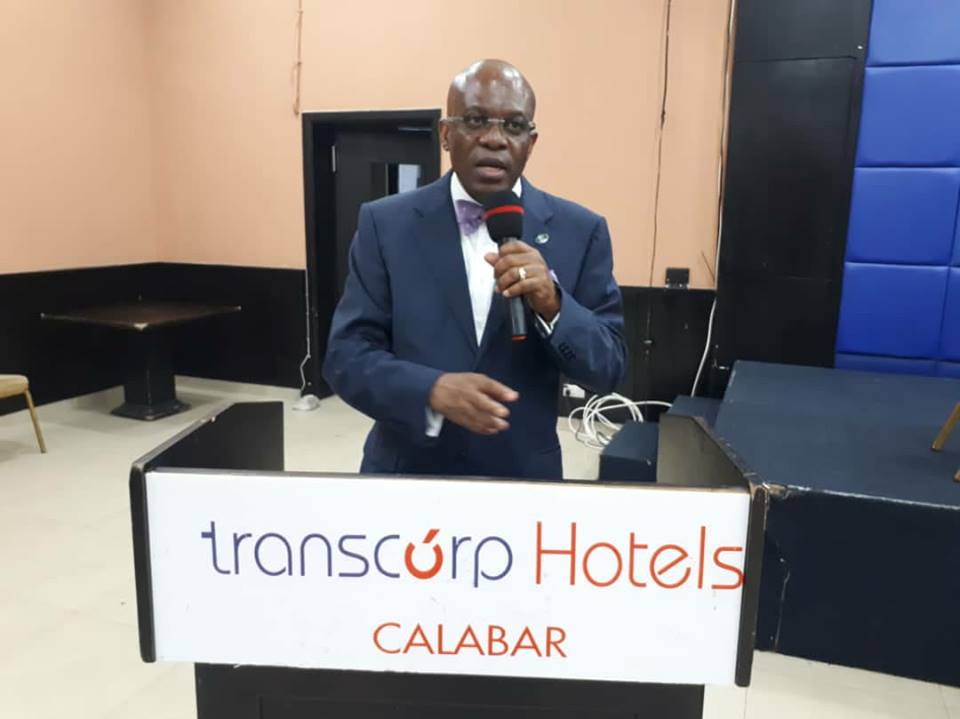 The paper which borders on diversification into agriculture gave an interesting slant into the need and how Nigeria  can diversify its economy beyond oil.

Below is the paper in full

Nigeria is often referred to as the “Giant of Africa”, a nation with well over 182 million inhabitants which makes it the most populous black nation in the world.

Nigeria is one of the leading oil producing countries in the world and this has consequently led to oil becoming the mainstay of our economy and the major source of Government revenue in the country.

The Government’s sole focus on the oil and gas sector in terms of revenue has led to the dereliction of other important sectors of the economy, particularly the agricultural sector which contributed well over 60% of the Nigeria’s GDP before the early 1970’s.

This huge dependence on oil as a source of revenue and the subsequent fall in oil prices was one of the contributory factors towards Nigeria falling into a recession in 2016.

Crude oil was first discovered in Nigeria in 1956 after which Nigeria joined the ranks of oil producers in 1958.

By the late 1960’s and early 1970’s, Nigeria had attained a production level of over 2 million barrels of crude oil a day.

This led to crude oil exportation becoming the main stay of the Nigerian economy with petroleum production and export accounting for about 90% percent of exports, and 80% percent of government revenue. This economic dependence on crude oil consequently relegated agriculture (which was hitherto the mainstay of the Nigerian economy from the early 1950’s and 1960’s) to the background in addition to other budding sectors of the economy.

This has consequently put the Nigerian economy in the very precarious position of being susceptible to the vagaries associated with oil price volatility.

The need for diversification

The Nigerian economy has been one solely reliant on crude oil exports which ultimately led the country falling into a recession caused by the crash of international oil prices and worsened by a drop in oil production quantities as a result of vandalisation and destruction of the nations oil assets by militant groups.

The result of this recession was the heightened need and the awakening of a consciousness for the need to diversify the Nigerian economy. This is further buttressed by the fact that Nigeria is ranked 125 out of 137 in the Global Competitiveness Index ranking 2017-2018.

In addition to the agricultural sector, there are a number of other sectors such as the broader extractive industry which Nigeria has started exploring as a viable means of attaining a diversified economy. The Ajaokuta Steel Project and the mining of limestone in Okpella are examples of this renewed focus on the larger extractive industry. Our primary focus in this paper however shall be on the agricultural sector.

Agro-industralisation contemplates the use of agriculture and agro-business as a tool for industrialisation of the Nigerian economy.

Apart from the fact that the agricultural sector provides a viable economic alternative to the Government in order to reduce its dependency on crude oil earnings, there are a number of other benefits for diversification into agriculture. These reasons include

iii.            Opportunity for job creation which would in turn reduce unemployment.

Prior to the discovery of crude oil in Nigeria. Agriculture was the mainstay of the Nigerian economy, accounting for over 57% of GDP from 1960 to 1969 and generating 64.5% of export earnings.

However from 1970 to the late 2000’s, the sector’s contribution to GDP and export earnings steadily declined due in large parts to the Government’s focus on petroleum exploration and exploitation.

An agricultural or an agro-industralised economy remains key to the attainment of a sustained and well developed economy in Nigeria. The agro-industry offers huge potentials for growth with important subsectors comprising of : Crop Production and Export, Livestock, Forestry, Fishery

Currently, crop production accounts for about 90% of the output in the Agricultural sector while fishery, forestry, and livestock account for the remaining 10%. The prospects for growth in these sub sectors are high particularly if value chains can be developed that turn raw commodities into processed goods for domestic consumption and export.

To varying degrees, a large number of Nigerians in rural areas already engage in some form of agricultural activity. This creates an opportunity to expand and develop both the number and variety of jobs in the sector as well as making it more attractive to the younger population by creating a value chain comprising of processing, marketing, manufacturing and other opportunities.

Nigeria as a nation is blessed with a total land mass of 92.4 million hectares and a total arable land of 82.0 million hectares. Despite this huge land mass the country spends well over $5 billion as our food import bill. With an agro-industrialised economy, the bulk of that figure can remain home in Nigeria, whilst improving our capacity for food exportation.

Ø             The Netherlands with a land mass about the size of Taraba State is one of the world’s 10 leading food exporting countries with fishing and agriculture operating as the major sector of the Dutch economy. With improved focus on agriculture, Nigeria can ultimately become a world leading exporter of food products

The agro-centric economy in Nigeria already has important drivers of growth which include:

The current Legal and Regulatory framework governing the agricultural sector can broadly be classified into three groups. i.e Land, Funding/Finance, Import and Export. Below is a list of some of the key legislations in this regards;

This Act establishes the River Basins Development Authorities listed under the First Schedule to the Act.

Micro, Small and Medium Enterprises Development Fund Revised Guidelines 2015 – The Fund was established in 2013 pursuant to the revised Microfinance Policy, Regulatory and Supervisory Framework for Nigeria (“Policy”) that stipulates that a microfinance development fund should be set up primarily to provide for wholesale funding requirements to micro finance banks/micro finance institutions.

National Fertilizers Board Act CAP N39 LFN 2004 – An Act to establish the National Fertilizer Board as a body corporate to be charged with responsibility for purchasing and distributing fertilizer to State Governments, at such subsidized prices as may be determined by the Federal Government..

On a related note, opportunities abound for financing through PPP, funding from USAID, African Development Bank and other Nigerian development banks such as Bank of Industry and Bank of Agriculture. For AFDB, it aims to support massive agro-industrial development across Africa.

Nigerian Export Promotion Council Act CAP N108 LFN 2004 -This Act establishes the Nigeria Export Promotion Council and has as its function to promote the development and diversification of Nigeria export trade, spearhead the creation of necessary export incentives and also to collect and disseminate to local manufacturers and exporters information on foreign market and provide technical assistance to local exporters in such areas as export procedure and documentation, transportation, financing, marketing techniques, quality control, export packaging, costing and pricing publicity.

Produce (Enforcement of Export Standards) Act CAP P32 LFN 2004 – This Act regulates the inspection of commodities for export from Nigeria at the ports of shipment for the purpose of enforcing the grades and standards of quality of such commodities. The Act also established the Produce Inspection Board which is responsible for inspecting the commodities to which the Act applies.

Pre-Shipment Inspection of Export Act CAP P25 LFN 2004 – This Act provides for the inspection of goods in Nigeria prior to their export. Clean Certificate of Inspection to be issued in respect of goods exported from Nigeria.

Pre-Shipment Inspection of Import Act CAP P26 LFN 2004 – This Act provides for pre-shipment inspection of imports. Clean Report of Findings and Import Duty Report to accompany goods to be imported into Nigeria.

The extant Legal and Regulatory Framework for the agricultural sector appears quite robust and extensive. What is required is the will to actualize the intent behind these legislations. Thankfully and as earlier mentioned, there appears to be a renewed desire to diversify and grow other sectors of the Nigerian economy (agriculture inclusive).

Recently, the Federal Government has made Executive Orders on the Promotion of Transparency and Efficiency in the Business Environment. Order 23 mandates each Port in Nigeria to assign an existing export terminal to be dedicated to the exportation of agriculture produce within 30 days of the issuance of the order.

This policy is to be lauded and the Government encouraged to come up with more of such agro-centric policies.

Agricultural credit guarantee scheme fund: Loan guarantee of up to 75%. This fund provides guarantees on the payment of interest and principal in respect of loans granted by any bank for certain agricultural purposes with the aim of increasing the level of bank credit to the agricultural sector.

Exemption from minimum Corporate Income Tax: Section 33(3) of CITA exempts the income of a company carrying on agricultural trade from payment of minimum tax

For Nigeria to metamorphose into an agro-industralised economy, the Nigerian Governments should at all levels rigorously push for and apply polices channeled towards improving the focus on agro-industries.

The Government needs to rehabilitate and revive all agricultural research institutes and schools of agriculture and reintroduce farm settlements and other river basin authorities to encourage massive production of agricultural produce.

The agricultural sector requires huge investments in improved machinery and technologies to make substantial impact. Most farmers are still making use of crude and unmechanised methods which yield low productivity.

Multiple investment opportunities abound and the development policies of international, regional and national DFIs must be harnessed to ensure the whirlpool of these funds are directed towards the development of agro-business in Nigeria.

Establish and promote an export-oriented agricultural sector with improved quality of produce comparable with average global standards. This will improve foreign exchange earnings.

Implement policies to attract more foreign direct investment in the sector from foreign partners with the necessary expertise and technological know-how to achieve optimal production capacity.

The drive for achieving an agro-industrialised economy must be complemented with improvement of rural and other basic infrastructure which are critical to agricultural transformation and establishment of a seamless value chain like rural electrification, road and rail for transportation of agriculture produced and processed/finished good, for export and domestic use alike.

NBA Calabar Branch has done well focusing on this untapped area of the Nigerian economy. What is required is consistent focus on it and the different strands thereof, particularly as it relates to our practice of law.