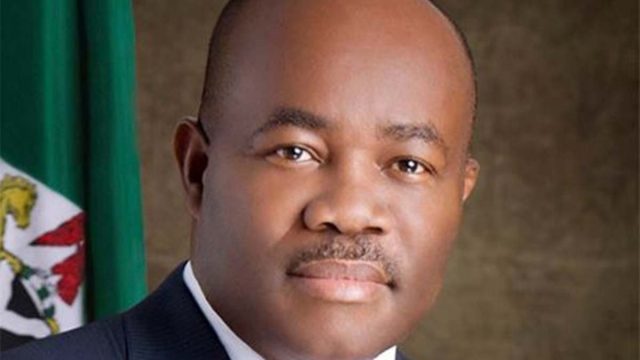 FORMER Governor of Akwa Ibom State, Senator Godswil Akpabio, yesterday, said that his heart was with President Muhammadu Buhari in the 2015 election despite the fact that he was a member of the Peoples Democratic Party, PDP. Akpabio who was the Senate Minority leader before his defection to the ruling All Progressives Congress, APC, in August, stated this when he led elders and leaders of the APC to visit President Buhari at the Presidential Villa, Abuja.

He alleged that throughout PDP 16 years in office at the federal level, there was not even one kilometre road project by the Federal Government in the state.

Akpabio who was Chairman. PDP Governors Forum  said that Akwa Ibom State would be the first state in South-South that would be won be APC in the 2019, stressing that, what remained of the PDP in the state was mere carcass as the body and soul of the party had joined the APC.

He said that over 266,000 new members have registered with the APC with him even as  some others have dumped the PDP. He assured President Buhari that no single indigene of South-South would vote against him (Buhari) in 2019, adding that there would be no such defection from the APC that would affect the chances of the party in the forthcoming elections.

On whether he was satisfied with the appointments by the Buhari’s government when it comes to South South and Akwa Ibom State, he said “Well being a new person in the APC, it will be wrong for me to dabble into issues of appointment.” but if you were to ask me appointment in the Presidency from 1999 to 2015 and even 2017 in those days,  I could say something but right now, I just came into APC and my focus is to ensure that APC remains here in the hilltop mansion of course in the Villa in 2019.”

“I am assuring you that we are not only going to win, the President will also win Akwa Ibom State.”