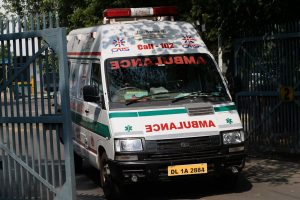 A 60-year-old man has been arrested after shooting his wife dead for serving his dinner late, police in India have said.

Ashok Kumar reportedly got into an argument with his wife Sunaina, 55, when he came home drunk on Saturday night before he shot her dead.

She was taken to hospital with a gunshot wound to her head, but had died of her injuries.

Rupesh Singh, a senior police officer in Ghaziabad city near the capital Delhi, told the BBC that Mr Kumar confessed to his crime and now regrets his actions.

Mr Singh said: “The man used to drink every day. On Saturday, he came home drunk and started having an argument with his wife.

“She was upset with his drinking habit and wanted to talk about it, but he wanted dinner immediately.”

He added: “He got frustrated with the delay and shot her.”

According to the Times of India, the shooting took place at about 11.45pm local time on Saturday in the Mnsarovar Park colony in Delhi.

The man’s 28-year-old son Rinku, his wife Soni and their children, aged 4 and 7, were also in the house at the time of the shooting.

Rinku said: “Around 9pm, my father returned home drunk and asked my mother for dinner around 11pm.

“A quarrel broke out between them as my mother refused to serve food immediately. Infuriated over the delay, my father whipped out a gun and threatened her.

“I, my wife and (younger brother) Tinku tried to intervene. But he opened fire and the bullet hit my mother on her head. She collapsed at the spot.”

According to the BBC, an incident of domestic violence was reported in India every four minutes in 2015