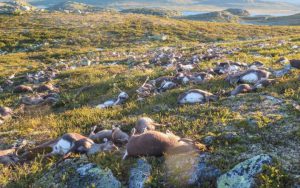 More than 300 wild reindeer have been killed after they were struck by lightning at a nature park in southern Norway.

The deaths were linked to a thunderstorm which battered the Hardangervidda region on Friday.

A further five reindeer had to be euthanised, according to the Norwegian Nature Inspectorate.

Dead wild reindeer are seen on Hardangervidda in Norway, after lightning struck the central mountain plateau and killed more than 300 of them

Dead wild reindeer are seen on Hardangervidda in Norway, after lightning struck the central mountain plateau and killed more than 300 of them

Gamekeepers said they had already counted the lightning-charred bodies of 323 reindeer, which a spokesman described as an “unusually high” death toll.

Knut Nylend, a spokesman for the Norwegian Nature Inspectorate, said the reindeer probably died in such high numbers because they were standing close to each other.

“There was an especially heavy thunderstorm in the afternoon. The herd was probably struck dead by the lightning,” he told Sputnik News.

“This is very special. I’ve heard of cattle being killed by lightning, but not in such huge volumes.”

It is the second time this month that a large group of animals has been shocked to death by lightning.

On August 25th, 38 sheep died after they were hit by lightning in the Indian district of Kanchipuram.