Alibi is being a plea available to an accused must be timeously raised by a party in the extrajudicial statement and the oral evidence.

It is only then, that the evidential burden on the accused that the police/prosecution is duty-bound to investigate the alibi and dislodge the same. And while the onus rests on the prosecution to disprove the alibi, the accused has first to discharge the evidential burden of setting up enough facts on which the alibi can rest.
See, Agu v. State (1985) 9 SC 221; State v. Nwafor (2021) 18 NWLR (Pt. 1809) 533 @573 para-H.
However, If the prosecution adduces sufficient evidence to fix the accused at the scene of the crime at the material time, the alibi I s thereby logically and physically demolished.
See, State v. Nwafor (2021) 18 NWLR (Pt. 1809) 533 @ 574, paras. D.
Instructively, there is nothing extraordinary or esoteric in a plea of alibi. 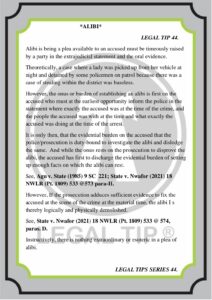