A Manhattan woman is putting JetBlue on the legal hot seat after the airline torched her keister with hot tea, then treated her “like a child” when she begged for help, she claims in a lawsuit.

Michelle Lavin, 25, suffered second-and third-degree burns on her butt during a “torturous” five hour, 40 minute flight to Las Vegas, but says what burned her more was the way the flight crew dismissed her suffering.

“I was in excruciating pain and had tears running down my eyes and asked them to get me anything. Cream. Something!” the Lower East Side resident seethed to The Post. “They said, ‘We don’t have anything for burns on the plane.’ They were looking at me like I was insane.”

Lavin was flying solo on her way to visit her older sister and some friends for the Labor Day weekend in 2014 when a flight attendant failed to secure the lid on the blazing hot tea, which was “capable of causing disfiguring burns” and wasn’t “fit for human consumption,” she claims in a Manhattan Supreme Court lawsuit.

The help desk manager was wearing her seat belt when the flight attendant brought her the cup of tea “filled to the brim” and “I remember it being very hot, even in my hands,” Lavin said. 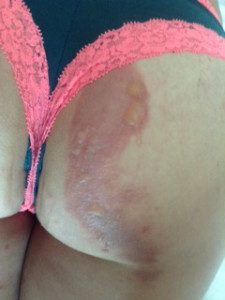 Minutes later, a man at the back of the plane started shouting at a woman to shut up her barking dog. It caught Lavin’s attention, especially when the woman went bonkers.

“She just screamed. It was insanely loud, like a horror movie. I got very nervous and everybody turned around and it was frightening,” Lavin recalled.

Lavin bumped her tray table when she turned to look at the screaming passengers, knocking over the tea.

It felt “like my pants were on fire,” Lavin said.

“I screamed at the top of my lungs. The pain was unreal. Every time I tried to stand, they said, ‘We need you to go sit down.’ I felt like I was being treated like a child.”

Two female attendants, including the one who served her the tea, offered her ice and aspirin, but Lavin says they weren’t taking her concerns seriously. So she dropped her drawers for them.

“They were horrified, and then they were much nicer. At that point I realized they knew they had a problem. They said, ‘This is very bad,’ ” she said.

She messaged her parents, who called JetBlue. The airline offered to have a stretcher waiting for her at the gate but a “humiliated” Lavin declined and instead went to the ER with her sister.

Attorney Thomas Lavin, who is representing his niece, said he filed the suit three years after the incident not to cash in on the flurry of passenger-flight crew friction making headlines but because Michelle initially wanted to avoid litigation. But then JetBlue “treated her like dirt.”

Michelle Lavin knows there will be skeptics, but said, “This was real pain and real torture.”