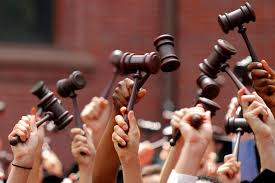 Whittier Law School in California is closing its doors for good next spring, and students and faculty are stunned. It is, after all, a shocking milestone – to be the first ever accredited law school to shut down.

“We were completely caught off guard,” Kristopher Escobedo, a second-year student and incoming student body president at the Costa Mesa, Calif., school, told the Los Angeles Times. “It was almost like an ambush.”

Future lawyers, heed this. Whittier’s demise could be a sign of things to come.

For young lawyers in all but the most elite schools, jobs are already harder to find. While a newly minted Harvard, Yale or Stanford Juris Doctor (JD) will nearly always find security and top-paying work, those attending non-rated or poorly rated schools will struggle as their profession contracts. Even students at moderately rated schools could see their prospects shrink, statistics suggest.

Whittier’s travails are fairly well-known — it has long struggled to stay afloat, with downturns in both applications and average LSAT scores. But its struggles are taking place, in some form, at schools nationwide. That’s making many wonder: Is Whittier an outlier or a bellwether, an unfortunate white elephant or the proverbial canary in the coal mine?

Over the past six years, Whittier’s first-year enrollment had dropped precipitously, from 303 students in 2010 to 132 last year, according to Law School Transparency, an online watchdog. Average student GPA and LSAT scores dropped, and its state bar passage rate fell to 22%. Whittier’s estimated full price — $284,377, according to the transparency site — put it at 28th highest nationwide, even as its “employment score” put it among the bottom 10 law schools nationwide. Only 2.3% of graduates in 2016 landed jobs with large law firms, a common measure of quality, according to the site.

Even with its difficulties, Whittier is “not an isolated case,” said Michael Horn of the Clayton Christensen Institute, a business think tank that focuses on innovation. “A lot of non-elite law schools are in this situation.”

Like many schools hovering below the top tier, he said, “They’re hunkering down just long enough until it thins down at the bottom.”

Overall, the job picture for law school graduates remains comparatively healthy. The class of 2015’s employment rate is 86.7%, according to October 2016 findings by the Washington, D.C.-based National Association for Law Placement.

But that’s about five percentage points lower than the employment rate for the class of 2007, which graduated before the economic downturn. About two-thirds of 2015 graduates landed jobs that actually required passing a bar exam, down sharply from more than three-fourths in 2007.

Over the long term, though, the trend seems troubling: In 2015, U.S. law schools graduated nearly 10% fewer students than in 2010.

Horn and others note that dropping enrollments have already taken a toll on other law schools. In 2015, two small Minnesota schools, Hamline University and William Mitchell College of Law, merged.

Also in 2015, Washington became the first state to license “legal technicians,” non-JDs who are permitted to advise clients in limited areas such as family law, divorce and child custody, but who can’t represent them in court. In a 2016 analysis, Horn and a co-author likened them to nurse practitioners.

Cristina Messerschmidt, who graduated from Northwestern University’s Pritzker School of Law in May and is studying for the Illinois bar exam, said she’s got a “10-year plan” to pay back about $250,000 in loans. She’s not worried about paying the sum back, “but you never know how that changes.”

Messerschmidt, 29, already has a job lined up, practicing data privacy law at a major Chicago firm. She did a lot of criminal defense work in school and would actually like to be a public defender someday, but she knows that a job at a big firm will help her pay down her debt faster than a low-paying government job.

As corporate legal departments and law firms operate under growing pressure to cut costs, technology is also displacing young lawyers who in years past would have spent their days doing research. Online startups like LegalZoom, Avvo and LawDingo, many of which also match clients with lawyers, are automating “low-level lawyerly tasks” — not just research, but contracts and wills, among other tasks, Horn said.

“E-discovery” tools are also getting more sophisticated, further reducing the need for humans.

Automation, Horn said, is “basically making lawyers within big firms more productive, so it’s reducing the need to bring in first-year lawyers, as you did in the past.”

Andrew M. Perlman, dean of Suffolk University Law School in Boston, noted a “significant decline” in the number of students applying to law schools overall, with the market for new lawyers “adjusting to what I think is a ‘new normal.’”

Technology, he said, “will not make lawyers obsolete, but there will probably be fewer opportunities for lawyers in the future.”

When he first graduated from law school, about 20 years ago, Perlman said he “spent a lot of time going page-by-page with physical documents in the course of discovery. A lot of that is now becoming automated and routinized.”

The upside: lawyers these days “are practicing at the top of their license, so to speak — that is, they’re doing higher-value work, which is actually a good development,” he said. “It’s good for lawyers, because the work they do get is more interesting. And it’s also good for the consumers, because they aren’t having to pay for lower-value work.”

Chas Rampenthal, general counsel of LegalZoom, said the startup is “not looking to put lawyers out of business.” But he estimated that 70% to 80% of every hour billed by lawyers “probably doesn’t require a law license.” Finding new clients, wining and dining them and fretting over billing, he said, can be done by someone else. “That is not what lawyers should be spending their time doing.”

If technology can take over low-level tasks, he said, law firms can bring down costs. That could make legal services cheaper, which would make them more widely consumed by those who can’t afford them now.

A profession that shuts out 80% to 85% of the people who need it “is a really crappy profession to be in,” Rampenthal said. “And people are starting to figure it out.”

Though he blanched at comparing LegalZoom directly to the troubled ride-hailing service Über, Rampenthal said the latter, enabled by smartphones and GPS, has prompted more people, not fewer, to drive cars for a living. “There are more people in cars, giving more people rides,” he said.

It’s actually “a great time” to go into the legal profession, he said. “From my perspective, it is an especially exciting time to be part of the legal industry, because I think it is changing more significantly and more rapidly than at any time in anyone’s memory.”

LegalZoom’s Rampenthal said technology may well shrink the job market in the short term, but if costs go down, public demand for legal services will eventually rise. In the long term, he said, demand for lawyers could rebound and more law schools may open.

Actually, he said, if technology can make legal help more widely available, the profession has a moral duty to make it happen.

“There’s no doctor in the world, no research scientist, who would say, ‘You know what? I’d rather (assign) 30 research scientists to spend two or three months to crack a protein instead of having an artificial intelligence do it in three minutes so I can start treating people,’” he said. “They don’t look at it and say, ‘Geez, it might put me out of a job.’ They look at it and say, ‘It might save millions of lives.’ We can’t look at technology as a demon when it’s doing such great things.”